“The Hidden Canyon: A River Journey”

Editor’s Note: Our special guest, renowned photographer and author, John Blaustein, offers his reminiscences as a professional river-runner at the Grand Canyon. He explains how it led to his collaboration with the late Edward Abbey, the famed environmental author, on their classic, “The Hidden Canyon: A River Journey”.

News from John Blaustein, Summer, 2015: THE HIDDEN CANYON: A River Journey is back in print for the third time! First published in 1977, a second edition was published in 1999. Now it’s 2015 and an all-new edition has just been published. Completely re-designed, the new edition includes over four dozen previously unpublished images. Edward Abbey’s journal still accompanies the photographs, as does Martin Litton’s introduction. New to this edition is an Afterword by Kevin Fedarko, author of The Emerald Mile. 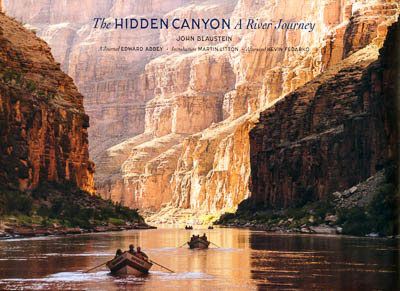 It’s been almost thirty years since my first trip through the Grand Canyon in a dory. In spite of all the time that has passed, I still have a vivid memory of a particular day on that first trip. It was the first time I’d seen the rapids in the Upper Granite Gorge.

In 1970, having just graduated from the University of California, Berkeley, with a degree in anthropology, I had no idea what I would do for the rest of my life. I was sure I wasn’t going to be an anthropologist. Although I had spent most of my time while in school doing photography, I wasn’t too sure about pursuing that as a career either.

Then I met Martin Litton, and he invited me to come along as the cook’s assistant on the first of two Grand Canyon river trips he was planning for that summer; I accepted the offer since I had nothing else planned. Martin is the founder of Grand Canyon Dories and the recipient of the John Muir Award–the Sierra Club’s most prestigious award. He recently celebrated his eightieth birthday by rowing a dory down the 277 miles of the Colorado River through the Grand Canyon, becoming the oldest person in the world to do so. 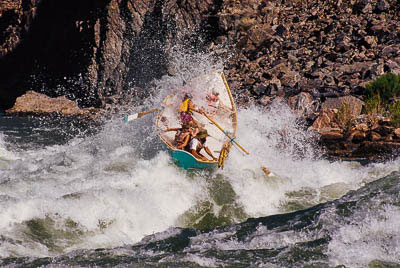 At the time I met Martin, I had no idea that the Colorado River through the Grand Canyon is the roughest stretch of navigable water in North America. In addition, I had never seen a dory, never been in a rowboat, and done very little camping. I was, you might say, a “city slicker.” Shortly before the first trip was to begin, Martin called and asked me if I’d be available to go on the second trip as well-he needed an extra boatman for that trip and assured me that I would learn how to row during the first trip so that I could handle a dory in the rapids by the time the second trip began. I trusted Martin when he said that all I’d have to do was follow closely behind the lead boat and keep the bow of my boat pointed straight into the waves. Little did I know how much more there was to learn.

What I remember so well from that first trip in June of 1970 was the afternoon of the sixth day. I was riding as a passenger (trainee), and at the oars was an editor from Indiana University named Bernie Clayton, who had very little rowing experience. (At that time, none of the boatmen had much experience. They all came to the canyon from time to time and trusted Martin to lead them through the rapids.) We were in a dory nicknamed the “Submarine”-not really a dory at all, but a cataract boat that cut straight through the waves rather than gracefully bobbing to the top of each wave. We had just entered the Upper Granite Gorge where the river narrows and the soft red canyon walls are replaced by the shiny, black faces of steel-hard granite. 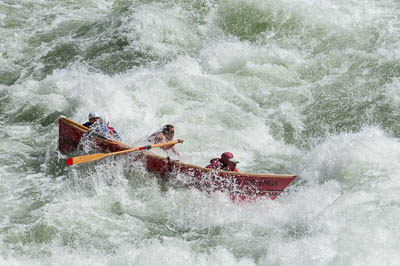 The weather was ominous-dark clouds filled the canyon, loud thunder echoed off the walls, and heavy rain was falling-as we approached Sockdolager Rapid, named by John Wesley Powell in 1869. “Sockdolager” is a boxing expression meaning “knockout punch!” As we drifted into the rapid, the upstream wind raged stronger, blowing the top of every wave into our faces. The wind was so strong, in fact, that Bernie couldn’t see a thing and could barely control the boat. Heading straight toward the middle of the huge wave at the top of Sockdolager, I braced for the worst. We floated down the tongue just as the fifteen-foot wave built to it’s meanest peak and crashed, full force, on top of us. The “Sub” was buried. We were completely submerged and roaring downstream, out of control, into one more huge wave after another. Somehow, we made it. We bailed out the boat, managed a smile or two, and prepared for the rest of the rapids in the Upper Granite Gorge: Grapevine (Powell thought the rocks and waves were like grapes on a vine), Zoroaster, Horn Creek, Granite Falls, Hermit, and Crystal. The terror I felt that afternoon while riding through Sockdolager was intense-I was shivering from fear (or was it the cold water?), and a lump in my throat kept me from screaming or talking. 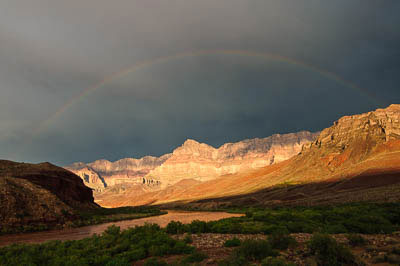 Now, many years later, I continue to return to the river because what I once thought of as terror has turned into exhilaration. There is simply nothing to rival the sheer thrill of floating in a small boat into the giant, crashing waves of a Grand Canyon rapid. It is a humbling experience.

I am often reminded by my fellow boatmen that I wasn’t much good as a cook’s assistant on that first trip and not much better as a boatman on the second one. In fact, I flipped in 23 Mile Rapid and then hit a rock in Unkar Rapid that almost broke the boat in half. To say the least, I did not get off to a very good start that first year. I will always be grateful to Martin for giving me a chance to improve my skills, which I’m pleased to say I did. There’s always an element of fear-or is it respect?-when running the rapids, but there’s also pure joy and irresistible fun.

What the rapids provide for one’s sense of excitement is matched, if not surpassed, by the majestic canyon walls that rise dramatically from the river’s edge. This is a vast landscape, a world of rock and water, the ultimate white-water adventure juxtaposed with what has been called “the most sublime spectacle on earth.” This Grand Canyon, as seen only from river level, has become a part of my life. 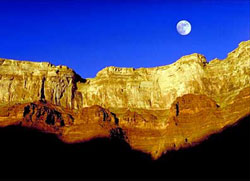 With all my attention focused on learning to row, I didn’t take very many pictures that first summer. Those that I did take were in black and white, and not very encouraging. I knew I wanted to go back-two trips were enough to get me hooked on rowing the rapids in a dory. I also wanted to photograph some more, and thought I would use color film the next time. It would be my first experience with color.

From 1970 through 1977, the year the first edition of The Hidden Canyon was published, I lived for over four months every summer on the river, rowing and photographing. I didn’t set out to do a book-it came about once the majority of the photographs were in hand.

In the mid-1970’s, once I’d found a publisher, it became clear that the book needed just the right text to accompany the photographs. What better person to write about the river trip than Edward Abbey, author of Desert Solitaire and The Monkey Wrench Gang! I mustered the courage to call Ed’s literary agent in New York and was told to have the publisher write a letter describing the project. My editor did just that, and added that Martin Litton had offered to take Ed and his wife on a trip down the river. A week or so later, my phone rang and a voice said: “Hi, it’s Ed Abbey… when do we leave?” I was thrilled. We scheduled a trip for the following July, and met as planned at Lee’s Ferry. It was an enormous treat to spend 18 days with Ed floating down the Colorado River. He was a powerful man, though gentle in spirit and very private. I had no idea what he was writing about until he sent his manuscript to the publisher.

After more than a decade of being away from the river, with much anticipation, and a bit of the old apprehension, I returned to the river in 1994, and again in 1996, 1997 and 1999. Every bend in the river, every riffle and rapid, every campsite and side canyon were just as I’d remembered them. After such a long absence, going back to the canyon was like returning home. 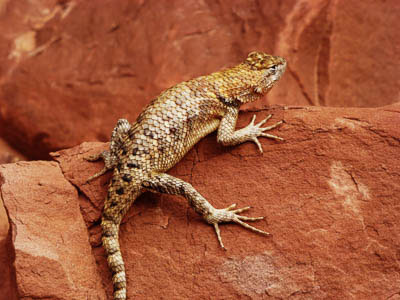 The first edition of The Hidden Canyon stayed in print for about fifteen years. At the urging of some of the boatmen and several of the passengers on the 1996 trip, I began the process of getting it back into print. Now, with renewed pleasure, I invite you once again to explore the Grand Canyon and its remarkable river in the new third edition of the “The Hidden Canyon: A River Journey”, published in 2015 by Cameron + Company.

(Special Note: I have read Mr. Blaustein’s book and found his photography quite amazing. It is a “must” for those who love canyon country landscapes. Joe Sprince, AWT Editor)

(Note: The story and photographic images on this page are copyright © 2000-2015, John Blaustein. Permission is required to use or reprint this material in any way.)

Fine Art of the Inner Canyon