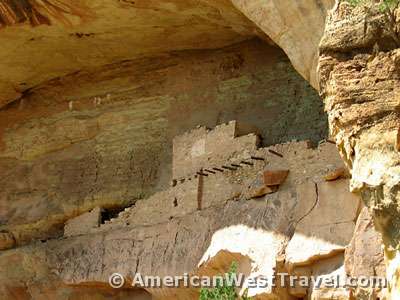 The Ute Mountain Tribal Park in southwestern Colorado was created to preserve significant remnants of the Ancestral Pueblo (Anasazi) people, including spectacular cliff dwellings and rock art. These Precolumbian native Americans developed skills in building stone dwellings nearly one thousand years ago, and remnants of their work dot the Four Corners region of the American Southwest many centuries after the inhabitants abandoned the region.

The most famous – and world renowned – Ancestral Puebloan relics are the great cliff dwellings of Mesa Verde National Park. The Ute Mountain Tribal Park is physically adjacent to Mesa Verde and preserves similar antiquities. However there is a significant difference. Virtually all loose artifacts at Anasazi sites on public lands have long since been looted or removed. Further, national park sites are highly developed and prepared for large scale tourism. At Ute Mountain Tribal Park, you will see artifacts all over the place, including pottery shards, cutting tools, corn cobs, and grinding rocks. The sites themselves have received only minimal stabilization for visitor safety. The roads are dirt, and the trails are rough. Access to the park which is along the Mancos River and tributary canyons is by guided tour only.

The result is that the Ancestral Puebloan ruins of Ute Mountain Tribal Park are among the most exciting to visit because they project the feeling of having been only recently discovered. It has therefore been selected by National Geographic Traveler as one of “80 World Destinations for Travel in the 21st Century”, one of only nine places in the United States so designated.

The Ancestral Pueblo people occupied the region from the 6th century or earlier until the late 13th century. They did not start to build stone buildings until around the 10th century. Prior to that, they lived in temporary shelters known as “pit houses”, the remnants of which are extremely rare. However the rock art of that era is quite abundant in Mancos Canyon. This era is known as “Basketmaker”. Stone pueblos first started to appear in valleys and on mesa tops. Such structures generally succumbed to the weather and can be observed in the area as mounds of rubble (see photo, left). They are sometimes excavated and restored, as at Chaco Canyon in New Mexico. The Anasazi did not start to build and live in cliff dwellings until the end of their time in the area, the 12th and 13th centuries. The caves and overhangs in which the cliff dwellings were built greatly aided their preservation over the centuries. The reasons why the pueblo people chose to live in cliffs during this time can never be known for certain, and it has always been a topic for lively debate. The era of stone buildings is known as “Pueblo”. The eras of the sites in Ute Mountain Tribal Park range from Basketmaker II through Pueblo III, about 500-1250 CE. 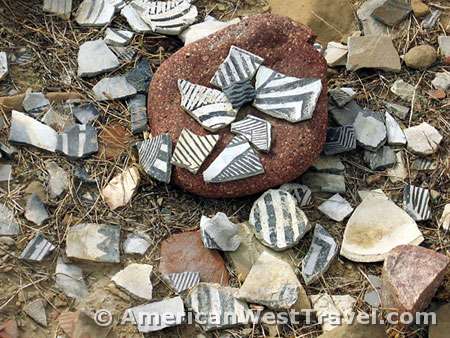 The full-day guided tour provided by the Ute Mountain Tribal Park is in two parts: in the morning, we cover several rock art and ruin sites in Mancos Canyon; in the afternoon, we hike an exciting trail to the famous cliff dwellings of Lion Canyon, a tributary of Mancos Canyon. Our tour guide is Gerald Ketchum, a full-blooded Ute.

In the photo, above left, the first stop in the morning is at the Red Pottery Site, an unexcavated village in Mancos Canyon. The group is standing on the unexcavated remains of a kiva. All pueblos in the region, even cliff dwellings, have one or more kivas which are round, semi-underground chambers thought to be ceremonial in nature. The site is heavily littered with pottery shards and basalt cutting tools (Photo, Right). Non-native red pottery was found here, indicating that the people conducted trade with tribes in other regions.

One of the canyon’s most exciting rock art panels is the winter solstice marker, known as the Spider Woman Site which dates to the Basketmaker II era, or about 500 CE. The photo, left, shows the left half of the panel. The photo, below left, shows the right half, with tour guide Ketchum deftly interpreting this complex panel. The panel’s purpose was to show the exact day of the winter solstice – the shortest day of the year – by the way the shadow fell on the markings. This was crucial information to a people who survived through agriculture. 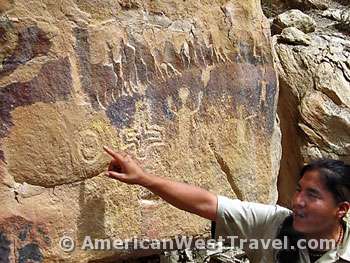 The symbols on the panel represent deities of the Ancestral Pueblo people and tell a story of the cycle of life – the annual renewal. The right side of the panel is the traditional story of creation. The Spider Woman at the far left (above, left) is associated with a new beginning, the large spiral represents the sun, and the large winged figure is the god of fire or death. On the day of the winter solstice, the shadow reaches and bisects the sun and the god of death but it does not reach the god of germination in between or kokopelli, the god of fertility to the right. It all symbolizes the renewal of life and the start of a new season as the days get longer. The right half of the panel demonstrates the spirit of the earth. The crack in the wall (above the guide’s arm) surrounded by human figures represents the sipapau. Pueblo people traditionally believe they came into this world through a hole in the earth known as the sipapau. All kivas also traditionally have a sipapau hole in their center. 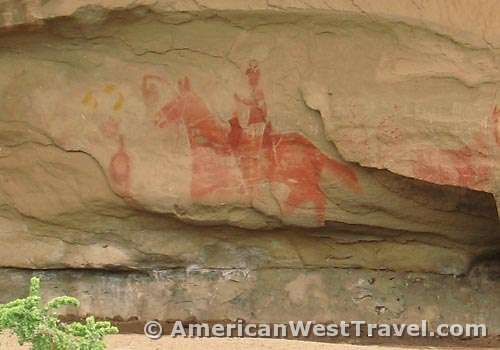 The tour also includes some outstanding rock art by the Ute people. At right, is the outstanding self-portrait of Chief Jack House. House was the last traditional chief of the Ute Tribe which is now headed by a chairperson of the tribal council. (There are actually now three Ute Tribes: the Northern Utes, the Ute Mountain Utes, and the Southern Utes.) Chief House kept his personal hogan (a five-sided lodge) at this site and enjoyed painting rock art. Painted rock art are called pictographs while etched art such as the Spider Woman Site are called petroglyphs. House proposed the Ute Mountain Tribal Park to his people as a way of bringing income to the tribe. Many Utes objected violently to the idea of allowing outsiders onto their reservation, and burned down his hogan in protest in 1976. Cooler heads prevailed, and the first tours were given in 1981. The Ute people deserve respect for this decision, for their excellent tours, and for the sharing and conservation of a precious resource.