Shamans Gallery is about fifty feet wide with several dozen anthropomorphic figures (stylized human-like figures, often in a mythic or religious context), most of them life-sized. They are pictographs, meaning they have been painted. The gallery has clearly been “touched up” over the ages; many of the faded figures have fresher outlines painted around them. The paintings are believed to be around 3,000 years old, part of the Late Archaic Era. This era highlighted a shift to hunting for small game and plant gathering as the big game animals of the prior Paleoindian Period had become extinct. The ghostly, shamanistic nature of the figures suggests that the Archaic people had religious beliefs of some kind.

The gallery was not discovered until around 1980 (which shows how few people explore remote Tuckup Canyon). It was formally described by anthropologist, Polly Schaafsma, in 1990. Her overview briefly states:

“…An estimated time frame for the style is the late Western Archaic Era with suggestions for earlier dating…The imagery at this site consists of over 40 abstract, elongated anthropomorphic figures in several colors elaborated with intricate designs. Animals, circular elements, and linear patterns occur in association. Many episodes of overpainting and renewal are evident, and the site is believed to have been a focus of prehistoric ritual activity. The paintings suggest a complex ideological cultural dimension during the Archaic period…”

Schaafsma asserted that the art style of Shamans Gallery was a regional variant of the Barrier Creek style found in Horseshoe Canyon (principally the Great Gallery), located hundreds of miles to the northeast. Anthropologist and river guide, Mary Allen, subsequently defined the style uniquely as “Grand Canyon Polychrome” stating that,

“Though closely related to the Barrier Canyon Style rock art of southeastern Utah, and to the Pecos River rock art of Texas, the Grand Canyon Polychrome pictographs have a unique combination of characteristics, and more subjectively, a unique look. The similarities between these three styles may be attributed to the “Pan-Archaic” tradition which seems to encompass most of the western United States. When sorting out the traits exhibited in the Grand Canyon Polychrome Style, it almost appears to be a synthesis of Great Mural, Barrier Canyon, and Pecos River rock art.” 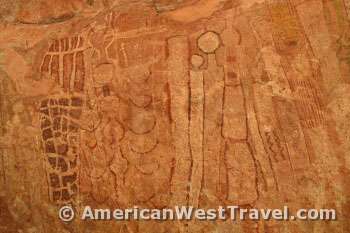 My own view as an amateur is that all these experts are essentially correct, that the sites are similar yet different, probably quite comparable to regional differences today. However the context is fascinatingly similar. All the natives of the Archaic Southwest lived in a similar environment: warm, dry, and probably desert-like as now. The era of plentiful big game was over, and these people depended on small game and plant foraging. A long drought would be ruinous. Lacking scientific knowledge of today, they probably prayed hard to their gods for plentiful food, water, and good weather. And 3,000 years ago, a superstitious, shamanistic religion would make perfect sense.

The Struggle Out of the Canyon 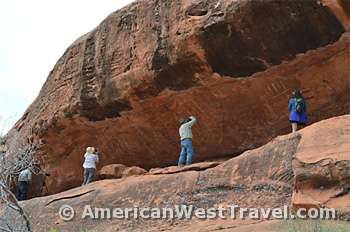 While everyone enjoyed their lunches and Shamans Gallery, I finally made the overdue decision to take charge of this excursion. I announced that we’d all be sticking together as one group and follow me up the trail and out of the canyon. End of discussion.

As we started to climb uphill it quickly became apparent that our two oldest hikers were in danger of not getting out of there. Soon I was relieving them of their camera equipment (of which they had way too much). Yet the situation continued to deteriorate. The two gentlemen were trudging shorter and shorter distances before having to stop. Finally, I told the others to push on to the trailhead, drop their gear, and come back to help with the gear of the other two.

Soon after that, I was obliged to relieve the slower fellow (my friend) of his pack as he could no longer move with his gear. A little farther up the trail, the oldest fellow finally came to a stop, and I relieved him of his pack as well, despite his protestations (and my response, “Goddamit, the party’s over, it’s almost sunset, get your pack off right now!”). So here I was, carrying three packs up the steepest part of the trail and wondering when the others would return. For the first time ever, I had my emergency whistle out and proceeded to blow my brains out. Unfortunately, no one heard my whistling; I forgot how the canyon swallows all noise. 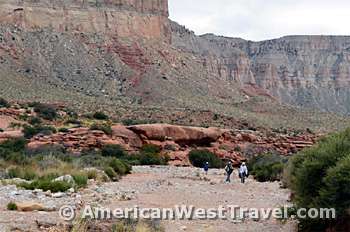 Still I was making it up the trail with the three packs, and the two guys were making it without having to carry anything. Ironically, two of the others showed up from the trailhead just after the trail started leveling off. When I asked what happened to them, they replied they were so exhausted, they needed to rest a while before returning. And finally, we made it back to the cars!

Interestingly, despite the ordeal, while everyone else was exhausted, I felt perfectly fine, having been fully pumped up on adrenalin. There still remained the tedious two-hour drive back to the paved highway. We finally arrived back at our hotel in Kanab at 10:30pm and were forced to eat at McDonald’s after a brutal day on the trail.

There is a lesson to be taken here: I should wait another 24 years before coming back again! But seriously, everyone eventually finished the trip safe and sound, and had a great adventure. And that makes it a good experience.