After 24 years of recovering from our last Grand Canyon misadvenutre (“Grand Canyon Hiking – The Kanab Creek Loop, Death March or Grand Adventure?”), we finally returned to Grand Canyon in April, 2014. My friend leads a rock art club, and he invited us to accompany them to Shamans Gallery (Photo, below) in Tuckup Canyon which is located in the remote and desolate far western section of Grand Canyon. This is a spectacular rock art site, with many life-sized figures. The artwork may be over 3,000 years old. It is comparable in scope and perhaps context to the Great Gallery of Horseshoe Canyon in Canyonlands National Park, widely viewed as North America’s finest rock art gallery.

Gerry and I had hiked to the bottom of the Grand Canyon seven times between 1977 and 1990. At first, we went on the easier and safer tourist trails in the Central Corridor, and then did progressively harder and more remote trips. This was basically our quest to find the “real” Grand Canyon wilderness, away from the tourist crowds and the easy amenities of the tourist trails. The culmination was our final trip in 1990, the Death March, where we did indeed find the real wilderness and experienced the full fury of the Grand Canyon with numerous mishaps and discomforts. After that, we had no desire to return – until now. 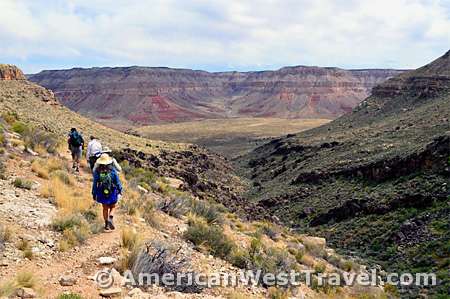 While not technically a difficult hike, the Tuckup Canyon experience is challenging in many ways. You start with a two-hour drive on dirt roads to reach the trailhead. The last hour is hard core four-wheel driving, slow and bone-jarring. The actual hike is a steep, three-mile, 2,000 foot descent to the Esplanade level, on a narrow and faint trail often marked by cairns. The environment is extremely arid, hot, shadeless, waterless, and very desolate. It may not sound that difficult but the sharp elevation gain climbing out at the end of the hike when you are tired always makes Grand Canyon treks strenuous.

The rock art group was all over age sixty and except for one person were newcomers to the Grand Canyon. As the most experienced person it was my responsibility to notice this and act accordingly. However as their guests, I figured it wasn’t for me or Gerry to tell them what to do. The result was they all struggled mightily on the return except for their one experienced person. Much of it might have been avoided had I checked them out in the beginning. The two most affected individuals were severely overdressed and carried far too much weight on their backs.

Another issue is that the exact whereabouts of Shamans Gallery is not officially disclosed. Federal agencies such as the Bureau of Land Management (BLM) and National Park Service (NPS) do not have the means to protect fragile antiquity sites on remote public lands. Their solution apparently is to withhold information from the general public. This policy becomes provocative when the government provides easy access to academicians, elites, and other insiders. Such individuals then cooperate in keeping the sites secret. For example, the definitive work, Rock Art of the Grand Canyon Region (by Christensen et al), shows numerous photos of Shamans Gallery, without mentioning its name or location. Further, the official Grand Canyon National Park website makes no mention of the site. The result is that those who wish to visit must scrounge around the Internet for information which may be of limited or dubious value. This can have negative consequences as it did on this trip. 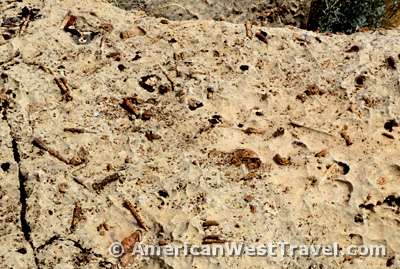 The first part of the Tuckup Trail is steeply downhill via a side canyon but fairly easy walking on a fairly visible trail. Soon the view opens up, and our day’s objective becomes easy to see. Below us is a huge flattop mesa with Tuckup Wash, a huge dry watercourse, plainly visible beyond. (Photo, above right)The map shows the wash turns and follows the base of the mesa on its far side. Shamans Gallery is said to be in that area. My quad map shows the mesa to be steep with cliffs on three sides. Tuckup Trail turns left into a gentle valley and skirts the mesa before reaching the wash. (Photo, below right)

Before dropping to the edge of the flattop mesa, we stop for a water break at a large limestone panel (right at a fence line) full of tiny fossils from ancient sea creatures. (Photo, left) The entire Colorado Plateau was once the bottom of an ancient ocean so such fossil sites are fairly common though always fascinating. 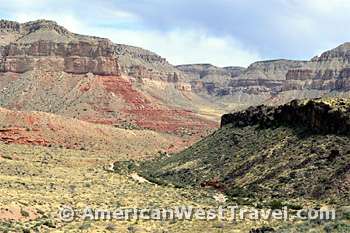 We soon arrive at the edge of the mesa at a large boulder which is said to be a landmark. The trail turns left here towards the valley and around the mesa. It is faint but still clearly visible and consistent with my quad map. Here’s where the lack of official information caused the start of the misadventure. My friend, the leader of the rock art club, has scrounged a highly dubious plan off the Internet, to walk across the flattop mesa and scramble down the cliff on the other side. He’s locked into this idea and can’t be deterred. In the end, half follow me down the trail, and half follow him across the mesa. I figure, when he sees the problem, he’ll come back and follow us on the trail.

Critical Grand Canyon Rule: If you are neither experienced nor in top physical shape, you stay on the trail and don’t mess around! That’s how people die in the Grand Canyon. Secondly, rangers frown on unnecessary cross-country travel, as you will damage fragile – and often virgin – cryptobiotic soil.

Meanwhile the valley trail is faint but easy to follow and fairly easy walking as well. It does cross a somewhat large wash but the entry and exit points are well-marked with cairns. Soon we spot the other group on the mesa high above us. Obviously they didn’t find a way down the far side. However instead of returning to the trail, they’re trying to find a way down the side of the mesa. Soon they find a break in the sheer rock cliffs and are attempting a scramble down an extremely steep slope. These are age 60+ people without appropriate experience attempting a maneuver that would be an effort for experienced canyoneers. Any fall here would result in serious injury (in a place where help would be many hours away). Further they are burning up precious, limited energy which will be needed for the return trip. 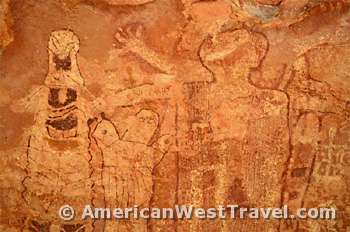 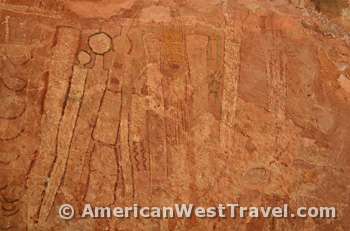 There is nothing to do now but continue on the trail and hope that the others make it safely down the slope and find their way. Our trail soon ends at a small wash but there are clearly footprints going downstream. In perhaps a couple of hundred yards, the wash empties into Tuckup Wash, a huge and obvious watercourse. Gerry quickly finds Shamans Gallery about two hundred yards downstream (a right turn) on the left side of the wash. It is in a shallow alcove on a red sandstone ledge about ten feet above the wash.

The rest of the group arrives about a half-hour later, worn out but in one piece. Some short cut.