All photos on this page, © Arizona State Parks

Kartchner Caverns State Park, opened in 1999, is one of Arizona’s newest wonders. Kartchner Caverns is a stunning limestone cave system considered one of the top ten in the world. Discovered in 1974 by explorers Randy Tufts and Gary Tenen, and not revealed until 1988, the opportunity existed to preserve the caverns in near pristine condition. (Photo right, the visitor center.) 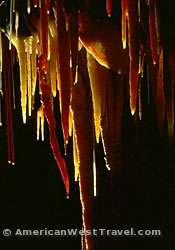 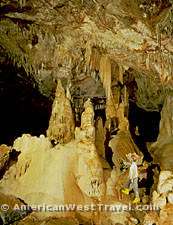 However the cave is extremely fragile. Exposure to outside air can dry out the cave and terminate its growth. Human handling can easily break delicate formations or ruin them with skin oils. Many well-known caves have suffered on both counts. 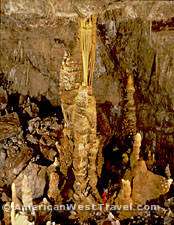 In 1988, the Kartchner family sold the land to the state of Arizona which has spent many years and much money to develop the caverns as a state park and attempt to preserve its pristine condition. At present, small groups are taken on guided tours through the Rotunda and Throne rooms. A third major room, the Big Room, is a longer and more physically challenging tour. The Big Room tour is only available from October 15 through April 15.

At right in the Throne Room, the massive column known as the Kubla Khan stands over 58 feet tall!

As you enter the cave, you pass through a series of hermetically sealed doors. Each rear door is closed before opening the forward door. The idea is to keep the dry desert air out of the humid (98%) cave. The are also misting systems within the cave. The trail is designed to keep human hands away from the more delicate formations. 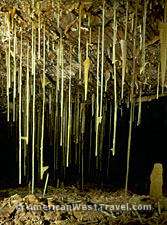 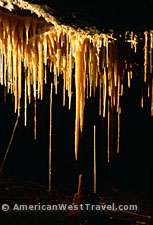 The first tour stop is the Rotunda Room where you will see spectacular soda straw formations (photo, left). These are hollow calcium carbonate tubes which are formed when mineralized water drips through their centers. They grow at the rate of perhaps one inch per century. Their paper-thin walls can be broken with a touch. Kartchner is home to the second longest soda straw in the world, measuring an unbelievable 21 feet, 2 inches!

At right is a fascinating combination of soda straws and stalactites. Stalactites start out as soda straws. Sometimes the hollow center tube gets blocked. The calcium carbonate is then deposited on the outside of the soda straw, forming a stalactite. Note two soda straws have broken off but remaining standing, stuck in the mud. Also, in the center a stalagmite and stalactite are close to touching and forming a column. 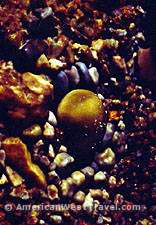 While the tour is only about an hour long there are many wonders to be seen. The visitor center has excellent displays. (Photo, left: rare and exotic cave pearls.) All photos on this page are courtesy of Arizona State Parks as photography is not permitted in the cave. 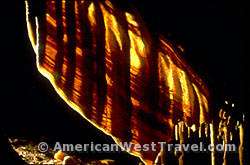 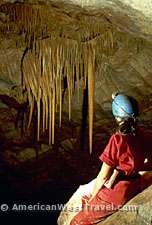 The photo, right, shows an example of a shield formation. A large water flow has separated a section of rock from the ceiling. It also causes a large number of stalactites to grow off the shield. At left, a drapery grows from a long crack in the rock. The drapery is so thin that it’s opaque; the backlighting can be seen through it. 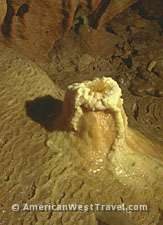 At right is an example of cave “bacon”. This is actually a drapery formation whose staining closely resembles its namesake. The photo, left, is of a “fried-egg” stalagmite. A lengthy period of very rapid water dripping has left a flattened stalagmite with a very “lathery” deposit on top.

Evidence of prehistoric life has also been found in the cave, including the skeleton of an 80,000 year old Shasta ground sloth. The cave is also home to about 1,000 female bats from April to September. The bats give birth to their pups here, nurse them, then return to Mexico for the winter.

This diagram shows some of the formations found inside Kartchner Caverns.