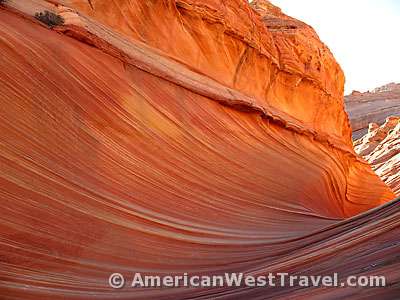 It is not a long or particularly difficult walk to the Wave, only about three miles from the trailhead. We soon arrive at a large wash with another long ridge of sandstone on the other side. A very steep sand dune leads up to the Wave which is hidden from view. This strenuous climb leads into a new world of stone. It is dominated by the so-called Liesegang Bands (see description below), the sharply defined colorful ribbons of sandstone of which the Wave consists. The Wave appears suddenly, and stunningly. Its name is quite appropriate.

[Photo, right: Part of the Wave appears golden in the early morning sunlight.]

The Wave is largely in shadow at this morning hour with bands of red and white predominating, with a little bit of blue and perhaps yellow. The upper parts in sunlight appear golden. Behind, the sandstone ridge rises for hundreds of feet, with Melody Arch easily visible at the top. It is one of the most surreal scenes I’ve seen in over thirty years of hiking the American West.

[Photo, right: The ridge rises hundreds of feet behind the Wave. Note Melody Arch at the top of the ridge. Strong hikers with scrambling skills can reach the arch.] 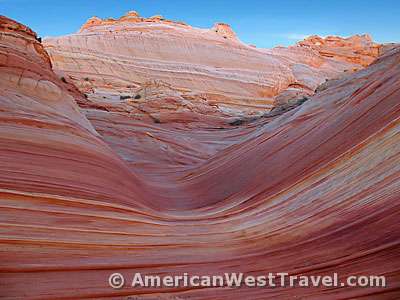 The so-called “Wave 2” formation is supposedly hidden in the ridge a few hundred yards away. However we pass it up, as it’s simply too cold with the shade and rock. There are Wave-like formations all over the place anyway. We climb back down the sand dune and hike in the wash for a while, where there is more sunlight. The wash soon narrows, and there is a bit of flowing water running from a small spring. Interestingly, the streambed is encased in ice. The canyon rapidly narrows to a crack, and we arrive at a pour-off too steep to pass. We could get around it by scrambling up one of the side walls but have had enough at this point. It’s just too cold, and time to head back.

When we arrive back at the trailhead, the car’s thermometer reads 38°F (3.34°C) (in the sun). The road is still largely frozen, and we make it back to the main highway easily. It would be nice to come back again when the weather is a bit more comfortable. There is still much to see, including Wave 2, Melody Arch, and the Dinosaur Trackway, not to mention the many other spectacular sites without names.

Of course, the chances of winning a permit during nicer weather (spring and fall) are quite slim and purely a matter of luck. The rigid permitting system is completely justified: there were very few other hikers around, almost no aircraft or other noise, and the place is absolutely pristine. It is a true wilderness experience. If we are lucky, we’ll be back again someday. 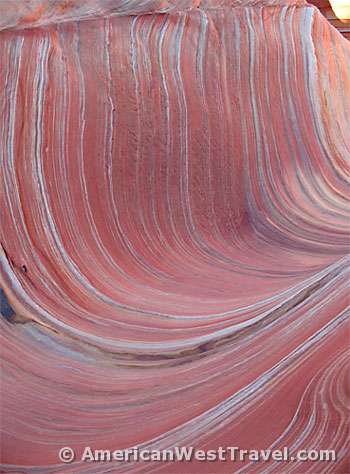 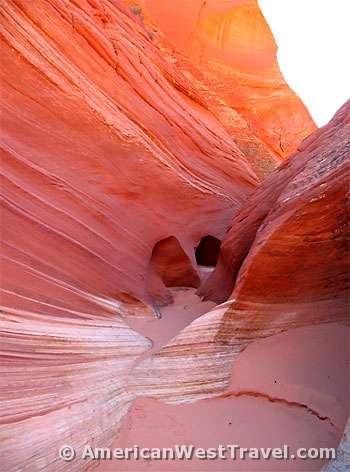 [Photo, above left: A bizarre closeup of the Wave. Photo, above right: The large wash below the Wave eventually narrows to a slot.]

How Did It Get This Way? The Formation of the Wave and Coyote Buttes. 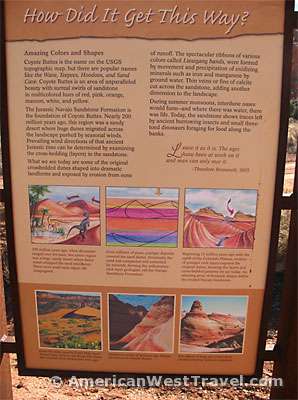 From the interpretive signs at the trailhead:

How Did It Get This Way? Amazing Colors and Shapes – Coyote Buttes is the name on the USGS topographic map, but there are popular names like the Wave, Teepees, Hoodoos, and Sand Cave. Coyote Buttes is an area of unparalleled beauty with surreal swirls of sandstone in multicolored hues of red, pink, orange, maroon, white, and yellow.

The Jurassic Navajo Sandstone Formation is the foundation of Coyote Buttes, Nearly 200 million years ago, this region was a sandy desert where huge dunes migrated across the landscape pushed by seasonal winds. Prevailing winds of that ancient Jurassic time can be determined by examining the cross-bedding (layers) in the sandstone.

What we see today are some of the original crossbedded dunes shaped into dramatic landforms and exposed by erosion from eons of runoff. The spectacular ribbons of various colors called Liesegang Bands, were formed by movement and precipitation of oxidizing materials such as iron and manganese by ground water. Thin veins or fins of calcite cut across the sandstone, adding another dimension to the landscape.

During summer monsoons, interdune oases would form – and where there was water, there was life. Today, the sandstone shows traces left by ancient burrowing insects and small three-toed dinosaurs foraging for food along the banks.

“Leave it as it is. The ages have been at work on it and man can only mar it.” Theodore Roosevelt, 1903

Lower panels, left: 200 million years ago, when dinosaurs roamed over the land, this entire region was a huge, sandy desert where fierce winds whipped the sand into dunes. There were small oases where life congregated.

Lower panels, right: Beginning 15 million years ago, with the uplift of the Colorado Plateau, erosion of younger rock layers exposed the original dunes, showing the layers and cross-bedded formations we see today. An amazing array of dramatic shapes define the eroded Navajo Sandstone.