“You are entitled to food, clothing, shelter, and medical attention. Anything else you get is a privilege” 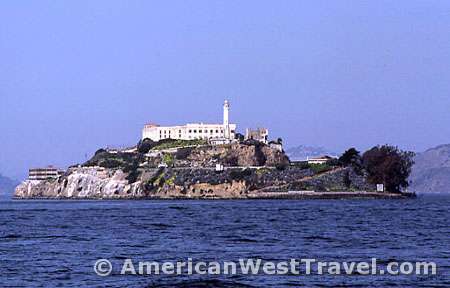 Rule #5 summed up the harsh realty behind the walls of the U.S. Federal Penitentiary, Alcatraz Island, from its opening in 1934 until it was closed in 1963. Having been mythologized by countless books and movies over the years, it is America’s most well known and infamous prison. It is also one of San Francisco’s most popular tourist attractions, part of the Golden Gate National Recreation Area.

(Above), the famous view of the island as you approach on the ferry from San Francisco’s Fisherman’s Wharf. 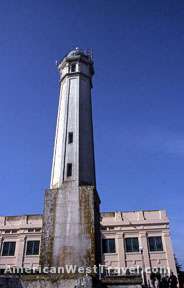 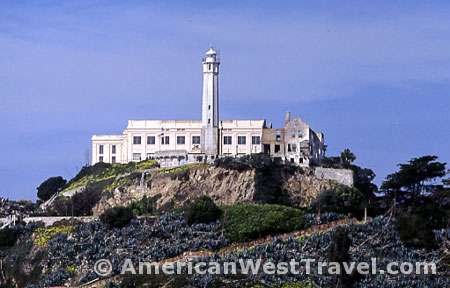 While Alcatraz Island is famous for its prison, it has a varied history, starting out as a fort to protect booming San Francisco and its wealth following the start of the Gold Rush. Construction of the fort started in 1853, and the lighthouse station (pictured left and right), with the cell house in the background), the first on the Pacific Coast, started operations in 1854.

The fortifications became obsolete in the late 1800’s, and the fort was decommissioned in 1907. The army decided to build a military prison and began construction of the cell house. During the Great Depression, it was turned over to the U.S. Bureau of Prisons who was seeking a high-profile maximum security facility.

The Bureau didn’t intend Alcatraz for notorious criminals – there were actually only a handful among the 1,545 men who served here – but rather for problem prisoners (escapers, troublemakers) from other federal locales. The focus of the “Rock” was maximum security. The isolation, restricted visitations, and secrecy for security purposes fomented its reputation as a horrible place. It was indeed harsh but the facility was clean, and the food was considered very good. 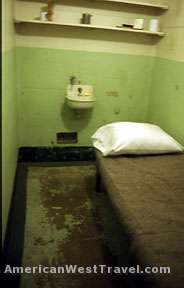 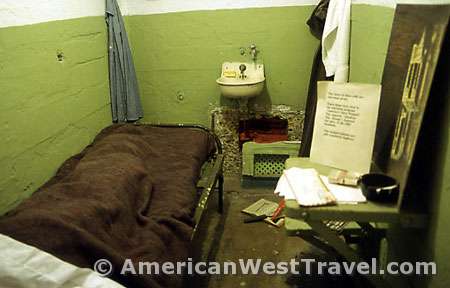 The cells were indeed stark and extremely small, with a tiny cot to sleep on and an even tinier toilet behind the cot (next to the prisoner’s head when he slept!). The cells were tightly stacked on three tiers with little more than natural lighting and occasional incandescent lights in the passageways. 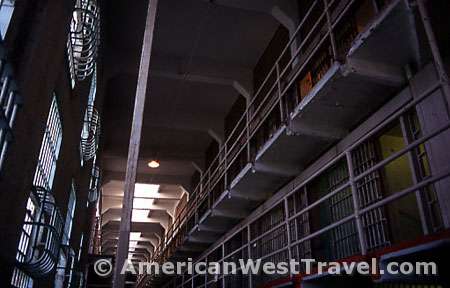 The most infamous prisoner in the history of Alcatraz was probably Al Capone. Surprisingly, the records as to which cell he occupied have been lost possibly because the last part of his four and a half year stay was in the hospital ward. However it is speculated that his cell was the second from the right, lower tier (actually the middle of the three tiers), in the photo at left. Some of the other infamous criminals who stayed here included “Doc” Barker, “Machine Gun” Kelly, “Pretty Boy” Floyd, and the “Birdman”, Robert Stroud. 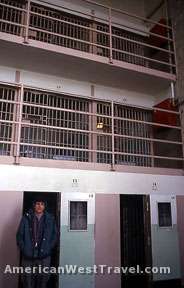 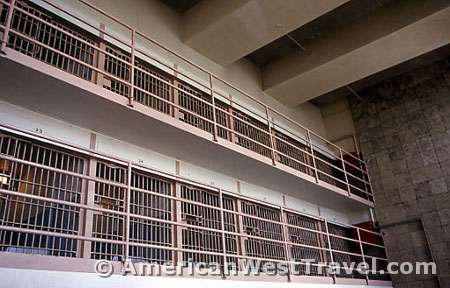 The “Birdman of Alcatraz”, Robert Stroud, actually conducted his famous bird studies while an inmate at Leavenworth. He was not afforded any special privileges while in Alcatraz. He, too, spent the last part of his 17 year stay in the hospital ward. But prior to that, he occupied the far right cell in the middle tier, photos, left and above.

(The lowest tier in the photo, (left), featured the special punishment cells known as “the Hole”. A prisoner who severely misbehaved could be tossed in these cold, unlit, unfurnished rooms for days or even weeks.)

Stroud’s real nickname was the “Bird Doctor of Leavenworth” but obviously that wasn’t catchy enough for the famous movie about his life, “The Birdman of Alcatraz”, starring Burt Lancaster as Stroud. Lancaster’s portrayal of Stroud as a kindly old gent was rather fictionalized. The self-guided audio tour of Alcatraz features a narration by one of the old time guards from that era. He described Stroud as a “homicidal and suicidal maniac”. 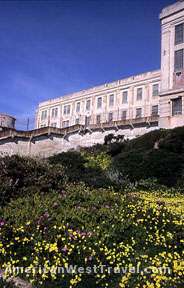 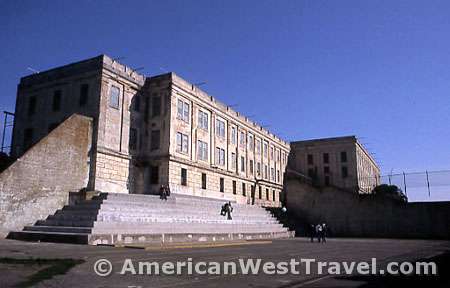 At right, a view of the prison exercise yard with the cell house in the background. The unusual stairs and seating area may be recognizable from such movies as Clint Eastwood’s “Escape from Alcatraz” which portrayed the escape of three inmates in 1962. The escape was successful but the men were never heard from again and were presumed drowned trying to cross the bay.

At left, a view of the hillside below the exercise yard. Like most of the island, it is covered with beautiful wildflowers and plants. Over the years, soldiers, inmates, and employees and their families have cultivated gardens and landscaping. Since the prison closed in 1963, the vegetation has run wild across the island. This has made modern Alcatraz an evolving ecological preserve with large colonies of numerous varieties of birds. The gull and heron colonies are so active that the Park Service closes parts of the island during breeding season. Rock pieces blasted into the sea during early construction created thriving tidal pools which attract the feeding birds as well as marine mammals. 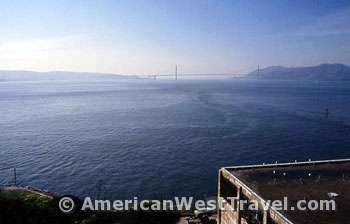 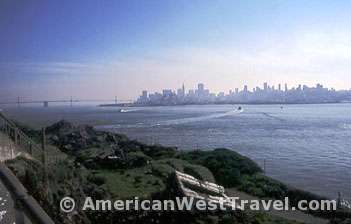 The island also offers spectacular views. Above left, looking west, San Francisco Bay with the Golden Gate Bridge in the distance. Above right, looking south, the San Francisco skyline with the Bay Bridge to the east. Note the tour boats plying their way between Alcatraz and Fisherman’s Wharf. Tours are relatively inexpensive and run numerous times every day. Reservations are strongly recommended most of the year. 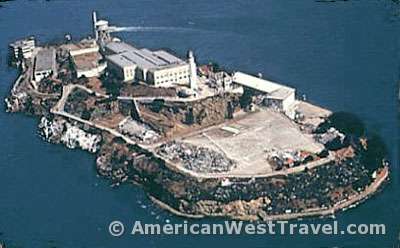 At right, an aerial view of the island, courtesy of the National Park Service.