On the Trail to Bumpass Hell

by Joseph A. Sprince – Photography by Gerald B. Allen except as noted 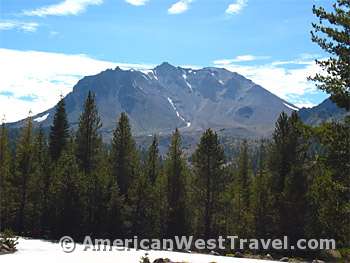 [Photo, left: Lassen Peak is the park’s most notable feature and its namesake.]

Lassen Volcanic National Park in northern California combines beautiful mountain woodlands, lakes and meadows with numerous volcanos and fascinating volcanic hydrothermal phenomena indicating the region continues to be active. Features include roaring fumaroles (steam and volcanic-gas vents), thumping mud pots, boiling pools, and steaming ground. Ample rain and snowmelt feeds the hydrothermal system and enhances its activity. The park’s features are rather similar to the more famous Yellowstone National Park (but there are no true geysers) but on a much smaller scale.

Lassen Peak is the park’s most notable feature and its namesake. It was last active from 1914 to 1921 with its major eruptions occuring in 1915. In the spring of that year it expelled a flow of molten lava which melted a heavy winter snowpack, creating a devasting mudflow. This was the last major eruption in the Pacific Northwest prior to the Mt. St. Helens eruption in 1980. It was an unusual occurrence because Lassen, like many Pacific Northwest volcanos, is a “plug” or dome volcano which generally erupts ash and solid debris rather than liquid material. A dome volcano is an area of land that bulges upward into a mountain due to the subterranean pressures beneath it.

Lassen Peak is the southernmost of numerous significant volcanos in the Cascade Range of the Pacific Northwest, part of the so-called “Ring of Fire”. These volcanoes are created by rising molten rock, or magma, generated as the oceanic Juan de Fuca tectonic plate, is subducted (plunges beneath) the continental North American Plate. While the peak itself is not active the ongoing hydrothermal activity indicates the area is still geologically active deep underground.

[The massive volcano collapsed about 10,000 years ago, leaving a caldera as shown in the top photo, above. Beneath it, a composite park sign superimposes Mt. Tehama on the current landscape.] 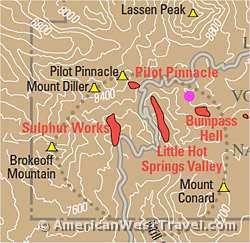 However Mt. Lassen is not the epicenter of volcanic activity here. Indeed it was a side vent to the huge stratovolcano formed here about 600,000 years ago, known as Brokeoff or Mt. Tehama. A strato- or composite volcano is what one usually envisions: a huge, conical mountain created by lava spewing out of its top over eons. The massive volcano collapsed about 10,000 years ago, leaving a caldera as shown in the photo above. Beneath it, a composite park sign superimposes Mt. Tehama on the current landscape. The map, photo at right, shows the actual caldera in the dashed circle. The photo above was taken from the Bumpass Hell Trail, indicated with a purple dot. This would have been on the lower slope of the original mountain. Note how the park’s active hydrothermal sites, marked in red, are all within the caldera of the original volcano.

[Photo, right: The actual caldera indicated by the dashed circle.]

Called Mt. Tehama. this towering peak once boasted an elevation of 11,500 feet – 1,000 feet taller than present day Lassen Peak. Mt. Diller and rugged Brokeoff Mountain (second and third peaks from right, respectively) are remains of this phantom peak. Lassen Peak was formed from lava extruded from a vent in Mt. Tehama’s northern slope. Mt. Tehama’s principal vent lay in the neighborhood of the the famous (present day) Sulphur Works (photo, below and noted on map, above), visible from the Bumpass Hell Trail. 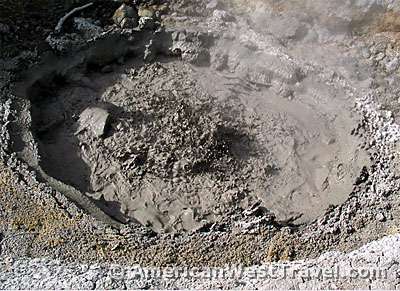 Mighty Mt. Tehama began to crumble 10,000 years ago – a few short clicks in the clock of geography. Volcanic activiy – especially around nearby Diamond Peak (barely visible in dead center above) gnawed at the underpinnings. Finally the mountain collapsed into itself to form a huge bowl-like caldera in which you now stand. The rim of this caldera has been broken and leveled by erosion – especially to the south, Mt. Conrad (far left) marks a portion of the original caldera rim.

[Photo, left. A large (about ten feet across) and very active mudpot at the Sulphur Works.] 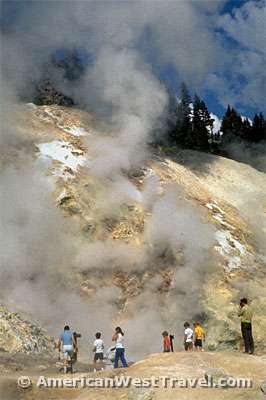 [Photo, above. A panorama of Bumpass Hell, at present, the most active hydrothermal area in the park.] Here you can view hot springs, mudpots, and fumaroles, as well as smell the rotten-egg stench of sulphurous gases which is a significant byproduct of volcanism. As we were here in September, the features were not very active. In spring and early summer, when there is much rain and snow runoff, you would see fuller springs, peppier mudpots, and lots more steam.

From the park brochure:

The hottest and most vigorous hydrothermal features in Lassen Volcanic National Park are at Bumpass Hell, which marks the principal area of upflow and steam discharge from the Lassen hydrothermal system. A prominent steam plume marks the site of Big Boiler, the largest fumarole (steam and volcanic-gas vent) in the park. The temperature of the high-velocity steam jetting from it has been measured as high as 322°F (161°C). Most of the hydrothermal features in the park contain mixtures of condensed steam and near-surface ground water and have temperatures that are near boiling. The steam-heated waters of the features are typically acidic and, even if cool enough, are not safe for bathing.

[Photo, right. The Big Boiler during a more active season (courtesy, NPS).] Big Boiler is the hottest fumarole – within a non-erupting volcano – in the world. However it is relatively cool compared to lave which measures about 2,000°F (1,093°C). The fumarole continues to enlarge as the churning steam eats away at the clay banks. A few years ago it engulfed a section of boardwalk which once extended closer to it. 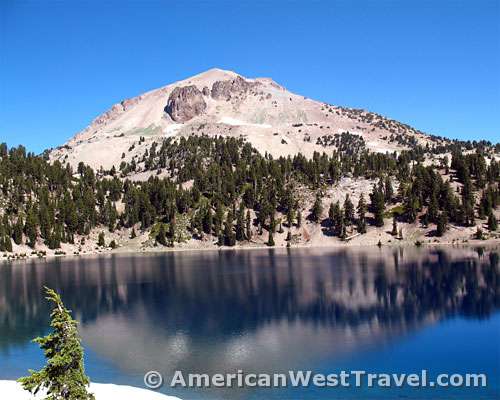 The three-mile round trip round trip trail to Bumpass Hell offers an excellent combination of mountain scenery, vistas, and volcanic features. It was named after early guide and mountaineer, K. V. Bumpass (hence the bizarre name). Bumpass eventually came to misfortune here, falling into a boiling hot spring, and having to have his leg amputated.

The three-mile round trip hike leads to Bumpass Hell, the largest upward-flowing hydrothermal feature in the park. All of Lassen Volcanic National Park’s hydrothermal features emanate from one heat source – the sam magma system that fed Lassen Peak’s 1914-1921 eruptions. The moderate hike gradually climbs 500 feet within the first mile and then descends 250 feet into Bumpass Hell. There you can experience up close the workigs of steam vents, mudpots, and boling springs which testify that volcanoes in the park are not dead, just resting.

Photo, left. Pretty Helen Lake near the start of the Bumpass Hell Trail, with Lassen Peak (elevation 10,457 feet) in the background.