The Chipeta Springs Solar Resort turned out to be a stylish, laid back, country inn with 25 unique boutique rooms. It was located on the edge of town, facing a large, green valley with snow-covered mountains rising in the background. We had chosen an inexpensive room which didn’t have the mountain views or a balcony with a two-person Jacuzzi. We took care of that situation the next day. However after a long, hard day of driving, it was time to relax and check out the 420-friendly teepee. Being clueless, I was stuffing a bunch of the pot in this little pipe and then crumbling a bunch of hash on top of it. (Supposedly that’s how you get the hash to burn better.) Anyway, the teepee was just that, set up on the edge of the property with an opening at the top to vent the smoke and not bother anyone. Our adventure there was extremely brief. We’d taken two or three “hits” (puffs) from the pipe and were almost immediately and dysfunctionally stoned. We stumbled back to the room and laid around like zombies for the next couple of hours. Conveniently, the NBA Finals were on TV.

This experience was a little uncomfortable, and indeed there was some dreaded paranoia. However it wasn’t disastrous; it was a matter of trying to relax until coming down to a comfortable point, namely being pleasantly high. I learned another lesson: the pot and especially the hash strongly reeked. When you handle it, then your hands reek. Then everything you touch reeks (like your clothes, luggage, the hotel room, etc.). My paranoia was about driving home with the car reeking of pot. Afterwards, I was careful about washing my hands and tightly wrapping up the merchandise. (I should point out that the clerk at Acme had cautioned about being careful with the hash. Well, careful is a relative term.) 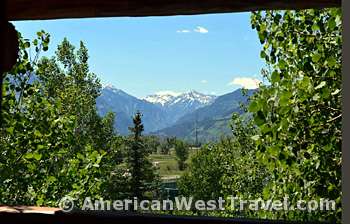 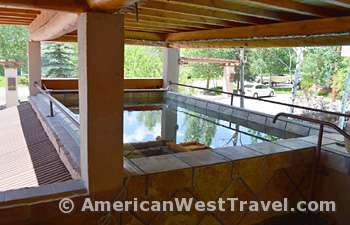 (Photo, above left, view from our upgraded room. Right, the beautiful “sitz” pool.)

After a few hours, we were actually feeling pretty fine and decided to go out to dinner. Not to worry about driving, everything in town was within walking distance. We selected the Colorado Boy Restaurant, featuring artisan pizza and handcrafted microbrew beer as well as a terrific spinach salad. Experts advise against mixing alcohol and THC but it was all fine.

We had a very slow start the next day given the long drive (over 500 miles) of the previous day and the indulgences after that. Rather than driving around and touring, we decided to go for a long run instead. An unpaved country road started behind the building and headed down the middle of the valley towards the mountains offering beautiful views as we ran. The road soon was passing pretty ranches and farms. Interestingly, one rancher was raising alpacas.

Following the run, we decided to relax in the resort’s “sitz” pool. It is similar to a Jacuzzi but larger and with salt water and no water jets. The pool was covered to keep out the very warm, high-elevation (6,900′) sun. Further, it offered a perfect scenic view of the mountains. Here, we met the resort’s owner, Jack, and had a good discussion about his resorts and my background as a travel writer. This turned out to be fortuitous.

When we returned to our room, it had become quite noisy due to some repairs being done on the adjacent room and the roof. I stepped outside to see what was going on, and encountered Jack supervising the workers. He immediately offered me a free upgrade to one of his top of the line rooms further away from the noise and featuring spectacular mountain views and a balcony with a Jacuzzi. Now this trip was happening! 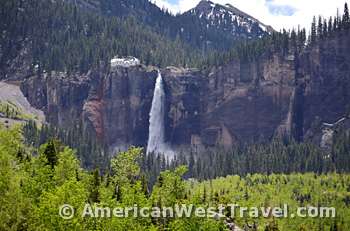 We had also been nibbling away at our edibles but those didn’t impress me as much. They were relaxing but not nearly as potent as the smokable materials. Late in the day, we paid a short but more cautious visit to the teepee and then went to the resort’s rooftop lounge which is open on days when local, live entertainment is provided. We had drinks and an appetizer, and then walked over to the Thai restaurant for a pretty decent meal.

Next morning, we tried something different, visiting the teepee at 5:00am. The idea was to especially enjoy “sleeping in” (so to speak). It was all excellent, and there was an added bonus: lying in bed, you could observe the mountains through the glass doors to the balcony. The sunrise was gorgeous! Our plan for the afternoon was a visit to Telluride and its neighbor, Mountain Village.

The drive back to Telluride offered excellent mountain views that were difficult to see when driving in the other direction. We drove through the town to the road-end a couple miles east. This was the observation point for 360 ft. Bridal Veil Falls and several other snow-melt waterfalls. It was a distant view which would have to suffice for today. There is a steep road (4WD and hikers) which goes to the pump house at the top of the falls. The remnants of the old mining company which Telluride once served were nearby. 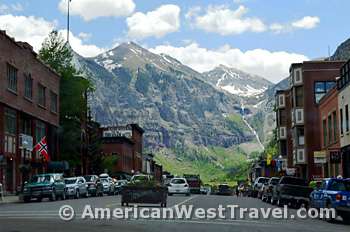 Then it was back to town and on to the gondola station. Telluride (photo, right) offers free, enclosed gondola service to the top of the mountain (where skiers and hikers may disembark) and then on to Mountain Village on the other side. This resort was opened in 1996 and is obviously intended for the super-rich with top-end resorts, restaurants, and stores. The highly planned and structured nature of the complex had the look and feel of a theme park – too artificial for me. Unlike Telluride, it was pretty dead up there, obviously being primarily a winter resort. (We were there in June.) From there, we headed back to the Chipeta in Ridgway and enjoyed sunset in the balcony Jacuzzi.

Soon it was time to leave this wonderful resort and head back to Arizona. We never had a chance to try out their lap pool or onsite restaurant or the fully equipped health club. (There was also a health spa for the ladies.) Well, plenty of reason to come visit again.

So, what about the 420 in Colorado? It is clearly a very expensive pastime, but if someone wants to indulge and enjoys it, I say more power to her/him. The positive results in Colorado (less crime, more revenues, etc.) speak for itself. In my view, arresting millions of people for pot over the last half century in an utterly failed drug war (while wasting gazillions of dollars we badly need elsewhere) is despicable, and a true blight on our democracy. Bravo for citizens fighting back!