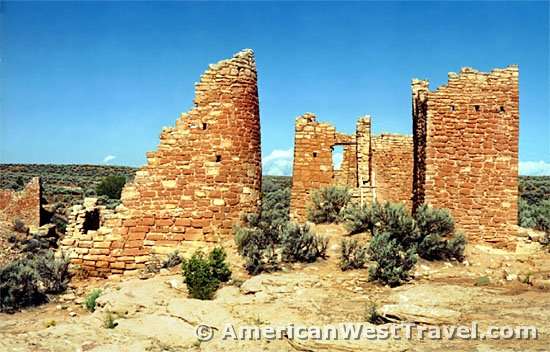 Hovenweep National Monument protects six groups of highly unusual Anasazi ruins scattered along the Colorado / Utah border north of the Four Corners. The remote and undeveloped nature of the area offers the visitor a unique experience and perhaps a perspective into the ancient world. Many miles from civilization, the monument lies in a vast area of scrubby, open mesas broken by occasional box (shallow but vertical walled) canyons. The look and feel of this place has changed little over the centuries.

[Photo, Below left], The Square Tower.

[Photo, Below right], A photo of Square Tower Canyon, site of the pictured ruins, shows the barren nature of the region. 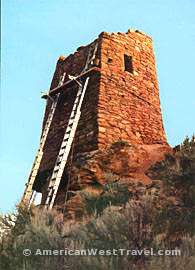 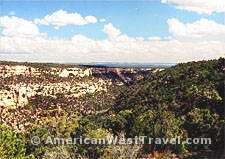 The Hovenweep Anasazi constructed masonry-walled pueblos starting around 1100 AD until the area was abandoned in 1300. The development started with small scattered units on the mesa tops and evolved after 1200 to sophisticated pueblos with large structures built around and in the heads of the canyons. This is the area where the springs tended to run. While closely related to the more well-known Mesa Verde Anasazi, the Hovenweep people added their own unique touch to their buildings. They had a penchant for building towers and massive castle-like buildings. And in varied shapes that included square, rectangular, round, and horseshoe (D-shaped)! 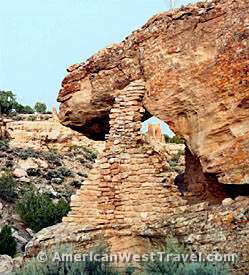 The reasons for the towers are not really known. They were almost always built in the canyon bottoms usually at the head near the spring. They did not appear for occupation. Some have been found without any doors or human-sized openings, meaning they had to be entered from the top. And they were useless for defense in the canyon bottoms.

The most common theory was that the towers were ceremonial. Dry farming in an arid region is a chancy proposition at best. The Ancestral Pueblo peoples were experts at building dams and irrigation systems. If you look closely, you can still see evidence of their works. However given the environment they probably also prayed hard for good growing weather. It is believed a long-term drought in the last part of the 13th century drove the Anasazi out of the entire region.

[Photo, right], the remains of Eroded Boulder House. The rubble on top of the boulder indicates this was not a cliff dwelling but the basement level of a multistoried building. Note the building on top of the mesa through the opening. 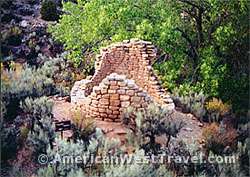 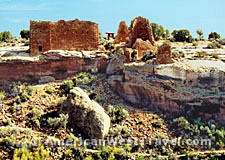 [Photo, Left] The remains of Round Tower sit at the head of the canyon in the lush area close to the spring. Compare this round tower to the square one above!

[Photo, Right] Another look at Hovenweep Castle. Note the rubble on the slope on both sides of the huge boulder. There were actually more buildings within the canyon than above on the mesa top. However the structures built on solid sandstone as shown here have lasted for centuries while those built on soft ground are completely gone. 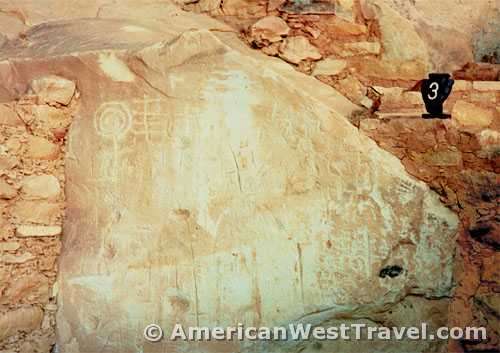