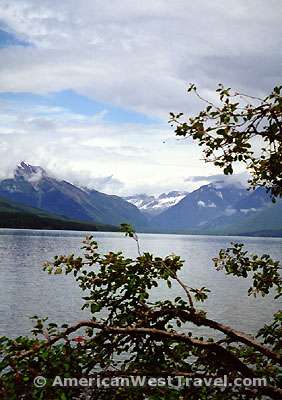 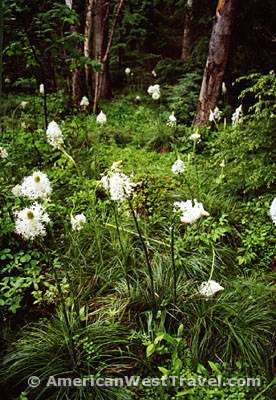 One of the Glacier National Park’s largest and most scenic lakes, Lake McDonald is ten miles long and 472 feet deep, having been carved by a huge glacier. Located on the park’s west side, it is surrounded by mountains on the north, south, and east. The continental divide with its jagged backbone runs north-south east of the lake. Called the Lewis Range, it provides a spectacular backdrop for the lake and also acts as a rain block. Much of the blocked precipitation ends up falling on the McDonald valley. The result is a mild, damp climate with an environment very similar to the Pacific Northwest coast. The forests here are extremely dense with very lush undergrowth. The western red cedar and hemlock trees, mainstays of the northwest coast, predominate. Spectacular wildflower displays are common. The photo, right, shows beargrass blooms. The flower heads are fist-sized and quite common in the area. 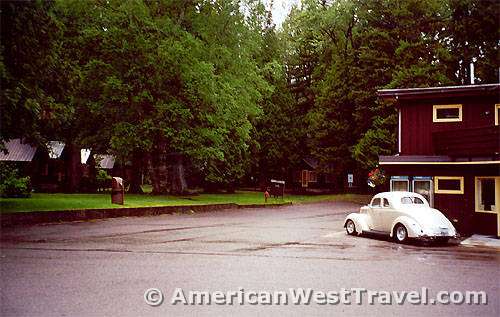 In the early part of the 20th century, railroad baron, James J. Hill, sought to drum up tourist business by building a series of grand lodges in Glacier National Park as well as tent camps and mountain chalets. The Lake McDonald Lodge (right) was actually started earlier, in 1895, as a hunting lodge. The lodge today is similar to the others in the park, aging but filled with rustic charm and a lovely fireplace in the lobby. At the bottom of the stairs is a boat rental dock for the fisherman. The lake holds 17 kinds of cold water fish, primarily varieties of trout. Left, tree-lined Apgar Village offers quaint and quiet lodging on the west end of the lake. 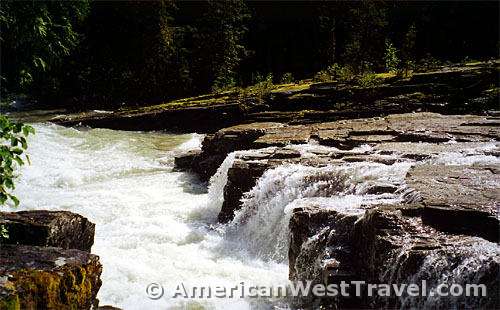 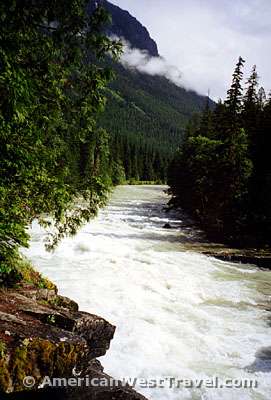 Above the lake, McDonald Creek provides plenty of scenic beauty. The white water section of the creek (right) starts at Sacred Dancing Cascade (left), then passes through McDonald Falls before feeding into the lake.

During the spring, Glacier can also be called the land of 1,000 waterfalls, due to the enormous snowmelts, and the creek flows can be an awesome thing to watch. This creek is somewhat calmer above the cascade but still very scenic.

Heading east on Going-To-The-Sun Road, you start to climb. The massive mountains above the lake come into view. Sadly, on this unsettled day, they are shrouded in fog and rain. 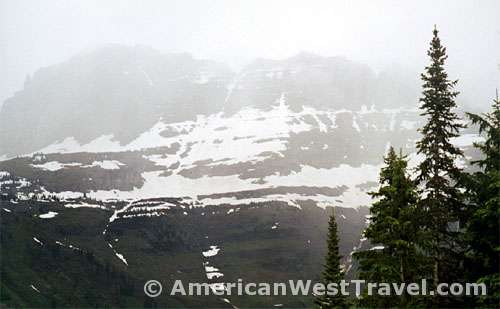 The heavy rain during this period has exacerbated the snowmelt, and there are waterfalls everywhere. On some of the large mountains, all of the drainage channels have waterfalls! Note the huge waterfall in the photo, below right. The closeup, below left, shows at least three more, smaller falls. 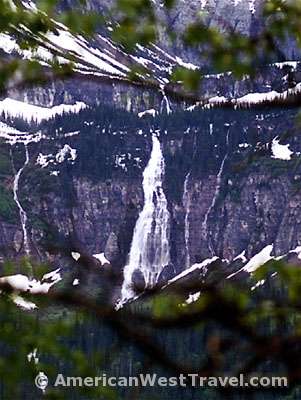 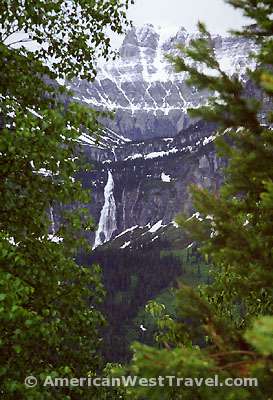