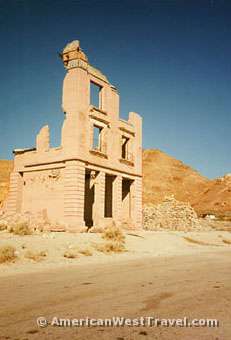 Most mining boomtowns were temporary affairs, built of tent canvas, wood, and adobe. They had a short frenzied life, after which they quickly and quietly faded away.

Rhyolite, Nevada, was built to last, a stone and concrete city intended to be a great metropolis. It included three story office buildings, banks, churches, even an opera house. The town had dozens of blocks with plumbing, electricity, and telephone service. Yet its life was as short and frenzied as any mining boomtown; it just took longer to fade away. The town was born in 1905 and was at its peak in 1907 with possibly 10,000 residents. The 1910 census showed 675 residents and the 1920 showed 14!

How did such a thing happen? Rhyolite was the culmination of the gold rush era. With one mining stampede after another in the west, people were ready to believe any get-rich-quick promotion, especially those who had missed out before.

When some exciting samples of gold-laced rock were found in the local Bullfrog Mining District in August, 1904, the Rhyolite frenzy was on. Sharp operators didn’t need actual gold to make a killing. Besides the inevitable real estate boom, stock promoters went wild selling very speculative shares in Rhyolite ventures from New York to San Francisco. In the end they were all worthless. 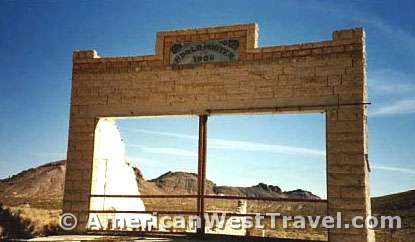 Because there had been numerous successful finds previously in the area people were ready to believe it would happen again based on superficial evidence. In the end only one large mine, the Montgomery, was established in the area. When it closed in 1911, only $2 million in gold had been taken, and the mine had not made a profit. And, as with most boomtowns, most everyone just moved on. 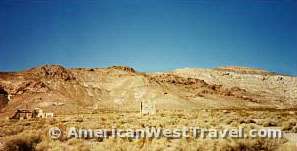 At left is a panoramic shot placing the two ruins shown above. In 1907, this empty valley was crammed with a city where many thousands of people lived. There are numerous other ruins and relics scattered about as well as a few intact structures used by a small number of present day residents. 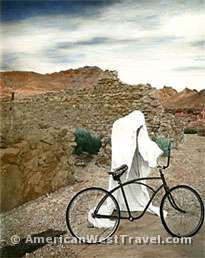 As of our last visit, Rhyolite still had several residents, temporary and/or permanent, all of them “colorful”. At some point a Belgian artist decided that a “ghost town” ought to have some ghosts. For whatever reason, the ghost at right patrols the town by bicycle. This photo is a very special one. It was an 8 x 10 black and white which was hand colored.

Another surviving artifact at Rhyolite is the Bottle House. It is actually a house built entirely with bottles. It was completed in 1906, and supposedly contains 50,000 bottles. It was being maintained as a small museum by a descendant of an original Rhyolite resident.

Below, an example of a small scale gold mining operation. This was the Inyo Mine in nearby Death Valley. It was in operation during the same period as the Rhyolite mines, circa 1905-7.