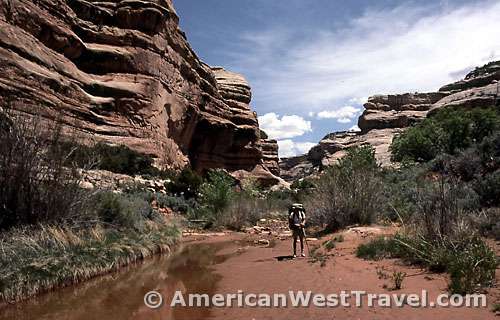 Grand Gulch is one of a network of sandstone canyons draining southeast Utah’s Cedar Mesa, which is rich in beautiful scenery as well as the cultural remnants of the Ancestral Pueblo (Anasazi) civilization. Grand Gulch Primitive Area, encompassing the main canyon and its network of tributaries, is especially rich in rock art and small cliff dwellings and other stone structures. The Rediscovered Journal, dating from 1985, starts in “Self-guided Exploration of Anasazi Clff Dwellings & Rock Art (Part 1)” and continues below, with a focus on rock art.

I recently found the following journal which describes in detail our backpacking trip to Grand Gulch Primitive Area in 1985. Additional comments are added in [brackets], including a discussion of the rock art. The narrative below continues with the second day in Grand Gulch and focuses on the fabulous rock art of Sheik’s Canyon. 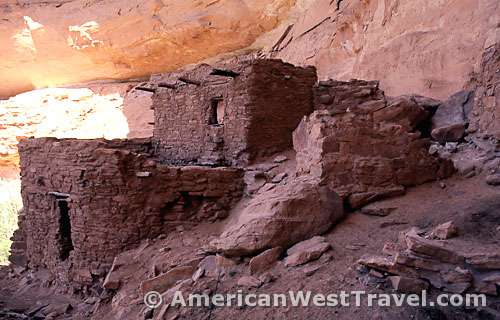 Sunday, May 5, 1985. The day starts clear and warm with an early sun on the campsite. We are quickly on our way and soon come to a side trail going up to a bench high on the north side of the creek. Obviously, there is a ruin on the bench. [Split Level Ruin at mile ten.] The bench is above a bend in the creek and extends perhaps a quarter mile to the canyon walls. Sure enough, there is a ruin at the base of the wall. It is more of a single large ruin rather than a series of small ruins. The walls are pretty well intact, and the structure rather resembles a miniature two-story single-family house [Photo, Left].

There are again substantial amounts of artifacts scattered about. Most of them come from the trash heaps [called middens] which are usually mounds below the lowest level of a ruins site. Split Level Ruin is probably the largest and most impressive site in the canyon. There are large midden mounds, the large structure on the bench, and more ruins in an inaccessible alcove high on the wall. The structure’s roofs are partially intact. They are supported by large beams [thick tree trunks] that fit through holes near the top of the sidewalls. Smaller branches are then laid perpendicularly across the heavy beams. These are covered by a layer of earth which is in turn covered by mortar. The same mortar originally covered over the walls as well. 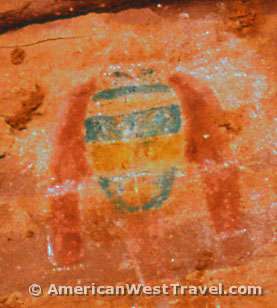 After lunch, we push on for our day’s destination, Sheik’s Canyon, about four miles downstream. The canyon is reputed to have numerous exotic pictographs [which are painted images, while etched images are called petroglyphs] including the famous Green Mask. We pass Coyote Canyon which has a lovely, wooded campsite right at its mouth. After a hard stretch we reach Sheik’s Canyon. The pictograph panel and Green Mask Spring are about a quarter mile up canyon. The canyon is hot and lacks shade, and there isn’t a decent campsite. We take a long break at the pictograph panel before returning to the main canyon to look for a better campsite.

The pictograph panel [14 miles from the trailhead] is very extensive: lots of handprints, “spacemen”, etc. The highlight is the Green Mask [Photo, Right], a colorful rendition of an Indian’s head done in red and green paint. It is quite different from most other pictographs, and perhaps unique. Most of the pictographs are on an inaccessible high wall. A thousand years of erosion may have lowered the ground level.

[The photo, above, is a composite of a very busy rock art panel in Sheik’s Canyon. The surreal images with large blocky bodies and small limbs, as well as “spaceman” images, are believed to be Basketmaker rock art, perhaps as much as two thousand years old. However Basketmaker pictographs were generally done in white paint. Their Pueblo ancestors probably re-did the four large images in their trademark red paint centuries later. It is not known why the heads were omitted. On the second large image from the left, the original head is faintly visible. Note that the second image from the right depicts a pregnant woman – the small image between the legs is the fetus. The photo, below left, shows Basketmaker “spacemen” in its very faded, original white paint.]

We return to Grand Gulch and take almost an hour to find a suitable campsite. Fortunately, it is a wooded site, as the weather is again starting to look bad. Our dinner is as follows: pea cup-of-soup, foil-pouched Salisbury steak, freeze-dried spaghetti and meat sauce, peas, crackers, cookies, and lots of pink lemonade. The weather is very threatening so we use the trees to set up our rain tarp, as we don’t carry a tent. It only drizzles a little but the wind howls constantly. After a few hours it settles down, and I sleep solidly the whole night.

Monday, May 6, 1985. The day starts clear again, and we plan to make camp early today. There are no major ruin sites on today’s agenda. The hiking is quite pleasant at first but we soon start to encounter stretches on jungle-like scrub. It’s uncomfortable but tolerable as long as you can follow the [informal] trail. If you lose the trail as we did a couple times, it’s pretty tough. Around midday, we stop in a small grove of cottonwoods on a bench. We’d like to just stop for the day but the area is too elevated from the stream, and it’s rather hot and dry. The surrounding area is too jungle-like: not very suitable for wandering around.

Instead of camping, we take an extended break, exploring a small side canyon for about a mile. We find a small ruin site where one of the buildings is painted green. This is the only painted ruin I’ve ever seen. We return to the bench in Grand Gulch, scramble up to a solitary ruin near the canyon wall, eat lunch, then push on to find a first rate campsite.

About 3pm, we find just what we’re looking for: a nice elevated flat area under a giant cottonwood, with easy access to the stream. The area is open with no jungle, a perfect setup for an afternoon and evening stay. The only disappointment is that our freeze-dried hamburgers turn out to be gristleburgers. For a change, the weather stays nice the whole evening. 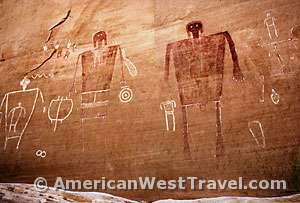 Tuesday, May 7, 1985. Today’s destination is the Big Man Panel, a major pictograph area [at mile 24.5]. The early morning hiking is particularly pleasant: nice views, and lush without too much jungle. We stop at mid-morning at Dripping Canyon [mile 22.3] and explore for perhaps half a mile up the side canyon [not as far as the spring] without finding anything interesting. The final walk to Big Man becomes very hot and tiring. We pass a modest ruin site but don’t have the energy to explore it.

We reach the Big Man Panel about midday. There is a large, flat section of canyon wall near the top with two large figures in red paint. It is accessible by a steep scramble up a sand dune. We eat lunch first, and then tackle the scramble. The man feature of the panel is a life-sized painting of a man and woman in red paint. It is interesting that the genitals are explicit on both figures. There are also about two dozen handprints in a row, perhaps the signatures of the artists. There are also numerous smaller figures in white.

We’re getting worn out and start looking for a campsite pretty quickly. We stop at one place but don’t really like it and push on. We soon arrive at Polly’s Canyon [marked as mile 26, but seemed longer] and find an ideal elevated campsite right in the confluence with Grand Gulch. I explored Polly’s Canyon for about a mile. There were no ruins but there was a pretty large arch. Its formation must be relatively recent as the broken rocks still sit at the arch’s base. I agree to have “tuna surprise” for dinner. It’s fine but not enough. This area seems quite rich with wildlife. The noise at dusk is immense, and there are sounds the entire night.

Wednesday, May 8, 1985. A change in the weather pattern: the day starts clear and quickly becomes heavily overcast. We become concerned that a real storm might be coming and decide to complete the hike today. It is ten miles to Collins Canyon, the exit point. We miss the last major site, Bannister Ruin, and arrive at Collins Canyon much earlier than expected. I can’t account for the orientation error. A long stretch of trail high on a bench away from the stream might have bypassed the ruin and shortened the distance, or perhaps there was an error in the pamphlet. [The mileages in the pamphlet are apparently based on the stream. Trails of use on benches could cause discrepencies.]

The final hike up Collins Wash to the trailhead and vehicle park is uneventful. The weather never gets worse than a drizzle, and there is no problem driving out on the rough dirt road.