by Joseph A. Sprince, Photography by Gerald B. Allen 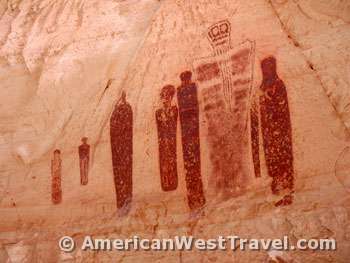 Horseshoe Canyon, a detached section of Canyonlands National Park in a remote section of southeast Utah, features some of the world’s greatest rock art. The Great Gallery is the most well-known and spectacular of the canyon’s four major panels. Horseshoe Canyon itself is spectacular with steep sandstone walls and groves of mature cottonwood trees and other riparian growth due to the presence of surface water. Visiting the canyon is an exciting adventure featuring a long drive on a remote dirt road followed by a great though strenuous hike.

(Photo, Right: The seven-foot Great Ghost and his attendants are the highlight of the Great Gallery.)

The Four Corners region is well-known for occupation by the Ancestral Pueblo, or Anasazi, people (and the neighboring Fremont culture) from about 500 CE to 1300 CE. The intriguing remnants of their stone-built pueblos and cliff dwellings, and their distinctive rock art are widely visible. However the Anasazi were late-comers. Horseshoe Canyon and nearby areas show evidence of human occupation for many thousands of years. Artifacts have been found dating back over 10,000 years, an era when Paleoindians (or “Big Game Hunters”) hunted mastodons and mammoths with their Clovis and Folsom-pointed spears.

From studies starting in the 1970s archaeologists have become aware of a different culture occupying the area after the Big Game Hunters and before the Anasazi, from about 2,000 to 8,000 years ago. This period has been named the “Archaic”. The Archaic people were nomads, who hunted large and small game and collected wild plants. They did not build permanent living structures, probably living in caves and small brush shelters. However they were apparently the most artistically creative people of the ancient world and the creators of what is now known as Barrier Canyon (the former name of Horseshoe Canyon) style rock art. 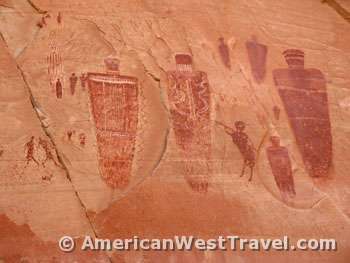 Barrier Canyon style rock art (Photo, Left) generally features human-like beings of a shamanistic or mystical quality. They are often life-sized having tapered bodies without arms or legs and frequently containing intricate designs. They are always of a purple or brown color. However this may be due to the deterioration of the pigment over the millennia. The original colors could have been quite different.

The age of Archaic rock art has always been a subject of debate. A thin layer of ancient paint with eons of possible contaminants does not lend itself well to carbon-14 dating. A series of very sophisticated testing during the 1990s put the likely creation date of the Great Gallery between 1800 and 1400 BCE. Some research indicated that a major climactic change 3,000 to 4,000 years ago reduced game and made living conditions much harsher. Some speculate that the Archaic people may have turned to religious or shamanistic activities in response to this stress, including the drawing of mystical figures.

Horseshoe Canyon also has a more modern history. Nineteenth century outlaws such as Butch Cassidy often took refuge in the area’s confusing network of canyons. Early twentieth century ranchers used the canyon to graze cows and sheep. The remnants of an old water tank and pumping station can be seen along the modern trail into the canyon. Mid-20th century prospectors improved the stock trails while unsuccessfully looking for oil, uranium, and other minerals. The canyon became part of Canyonlands National Park in 1971, and is now used exclusively for visitors to see America’s best rock art.

“While many of the pictures may have had for their makers a religious or ceremonial significance, others look like apparitions out of bad dreams. In this category belong the semihuman and superhuman beings with horned heads, immensely broad shoulders, short limbs and massive bodies that taper down to attenuated legs. Some of them have no legs at all but seem to rise ghostlike out of nothing, floating on air. These are sinister and supernatural figures, gods from the underworld perhaps, who hover in space, or dance, or stand solidly planted on two feet carrying weapons-a club or sword. Most are faceless but stare back at you with large, hollow, disquieting eyes. Demonic shapes, they might have meant protection and benevolence to their creators and a threat to strangers:

“Beware traveler. You are approaching the land of the horned gods. . . .

“Whatever their original intention, the long-dead artists and hunters confront us across the centuries with the poignant sign of their humanity. I was here, says the artist. We were here, say the hunters.”

Getting to Horseshoe Canyon 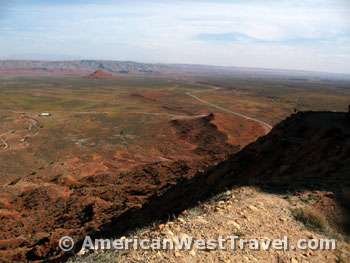 It is quite an adventure just reaching the rim of Horseshoe Canyon and its trailhead. The most direct route is a graded dirt road leaving paved highway Utah-24 about fifteen miles north of the remote town of Hanksville, Utah, and about a half mile south of the turnoff to Goblin Valley. If you are coming from the Four Corners area or points south, you will drive most or all of Utah-95, the Bicentennial Highway, between Blanding and Hanksville. The route features spectacular canyon country scenery in the miles south and north of Lake Powell and has outstanding points of interest along the way: Goblin Valley State Park, Mule Canyon Ruin, Natural Bridges National Monument, Valley of the Gods, and scenic Hite Overlook.

The dirt road is a long, lonely, and rutted stretch through ranch country. Watch out for cows crossing the road! Be sure to bear left at the one major intersection. The final, marked turnoff to the trailhead is a narrow, rougher one-lane road. During dry conditions, most vehicles can make it. However it is not guaranteed. In 2005, we had come up from Phoenix (about a 500-mile drive). While driving up there had been a ferocious wind storm. When we got to this final turnoff, the narrow road was buried in sand right up to the intersection. At the time, we were driving a large Dodge Ram pickup, two-wheel drive and no shovel. The main road was rather sunken so it was not feasible to pull off the road and walk in. So we had to give up after coming so far and having only two miles to go.

This time we were ready, driving a four-wheel drive Explorer and carrying a shovel. However the roads were fine, and there were no problems.

The trailhead at the rim of the canyon has a parking area, a trail register, and several interpretive signs. Primitive camping is allowed in this area. The only facility is a vault toilet. There are no picnic tables or water taps so you will be roughing it. It’s a large, flat open area so you can easily pick out a somewhat private site on the edge of the rim with fine, expansive views. This made for really fine April camping. Besides the views, there was dead silence throughout the night and lots of stars until a very beautiful, golden moonrise around 9pm. However this place had absolutely no shade or shelter, and would probably be quite brutal in summer, winter, or in bad weather.