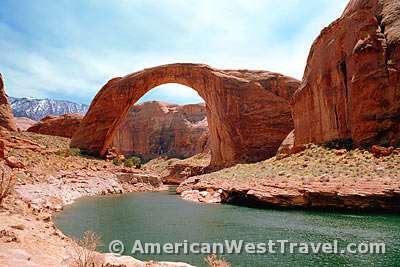 Rainbow Bridge is the largest known natural bridge in the world, with a span of 278 feet and a height of 309 feet, roughly the same as the U.S. Capitol in Washington.

[Photo, Right] Beautiful Rainbow Bridge from the Lake Powell side.

The bridge was once one of America’s most remote and mysterious wonders. However with the completion of Glen Canyon Dam in 1963 and the subsequent creation of Lake Powell, it suddenly became readily accessible. Today, thousands of tourists visit Rainbow Bridge every year, many by luxury tour boats from Wahweap Marina.

[Photo, Above] View overlooking the Rainbow Plateau from the slopes of Navajo Mountain, right background: the bridge is hidden in a maze of sandstone canyons; left background, a lava flow which covers much of the area. 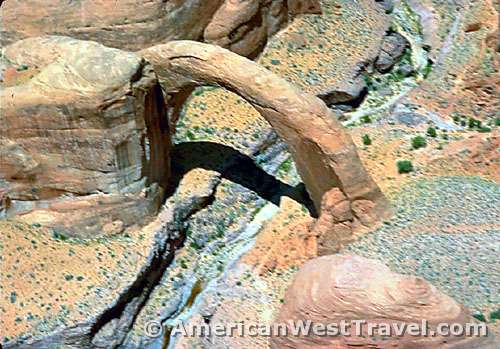 [Photo, Right] An aerial view of Rainbow Bridge, courtesy of the National Park Service. Note the absence of water or a water ring in the channel, indicating the photo was taken before the creation of Lake Powell.

It is still possible to capture the romanticism and adventure of visiting Rainbow Bridge by hiking overland, following the footsteps of the early adventurers. Now, as then, it is not easy, but it is a still a great adventure.

John Wesley Powell originally explored the canyons of the Colorado River, during his famous 1869 expedition. He did not find Rainbow Bridge, which is hidden several miles up Forbidding Canyon, then Bridge Canyon, both side canyons in the Glen Canyon section. While local Indians and prospectors probably saw the bridge earlier, it was first documented by the Douglass-Cummings expedition in 1909. The well-known explorer and (self-taught) archaeologist, John Wetherill, led the group. 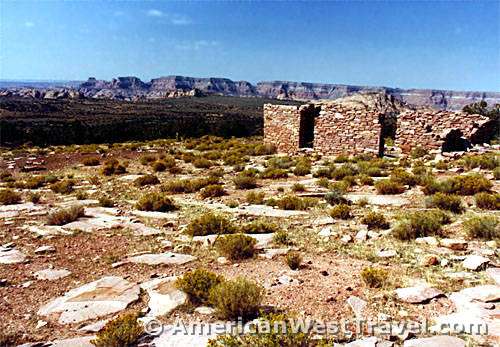 Until Lake Powell was created, the bridge could be accessed only by the extremely remote and rough overland route documented by Wetherill, or by rafting the Colorado River through Glen Canyon. Rafting in those days was uncommon. The only entry and exit points for rafts were hundreds of miles apart, at Hite and Lees Ferry, both many hard miles from civilization.

[Photo, Right] The ruins of Rainbow Lodge at one of the two present day trailheads to Rainbow Bridge. The lodge was an early and unsuccessful attempt to bring tourists to the bridge.

One Glen Canyon rafter to visit Rainbow Bridge in the early ’60s was famed environmental author Edward Abbey. In his classic book, Desert Solitaire, he recollects signing the visitor register as number 14,468! That’s 14,468 visitors in the first 50+ years! That is perhaps a summer month’s visitation today. He had the following most appropriate sentiment:

“(Lake Powell) will back water to within sight of the Bridge, transforming what was formerly an adventure into a routine motorboat excursion. Those who see it then will not understand that half the beauty of Rainbow Bridge lay in its remoteness, its relative difficulty of access, and in the wilderness surrounding it, of which it was an integral part. When these aspects are removed the Bridge will be no more than an isolated geological oddity…” 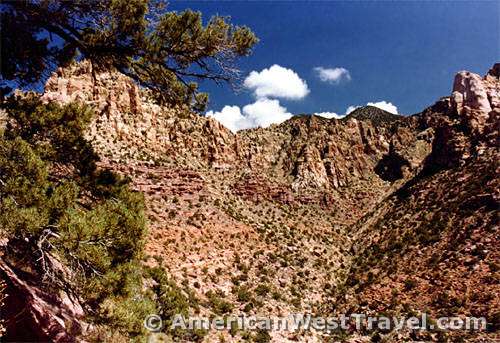 Present-day backpackers can select one of two trails to reach Rainbow Bridge. One skirts the south slopes of massive Navajo Mountain, the other, the mountain’s north slope. Both trails meet in the complex maze of sandstone canyons west of Navajo Mountain. Our choice was the south trail starting at the Rainbow Lodge ruins. Both trailheads are located at the end of a long network of dirt roads. The roads get progressively rougher approaching the trailheads. Our pickup truck had to stop two miles short of the ruins. [Photo, Left] The steep slopes of Navajo Mountain, the 10,000 foot peak just barely visible, center.