Including Buckskin Gulch – “The Dive of the Buckskin” 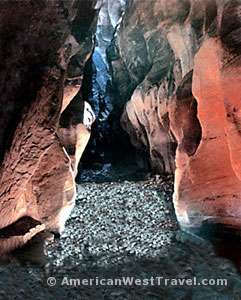 The Paria Canyon–Vermilion Cliffs Wilderness Area encompasses one of the finest canyons in the American Southwest and what is possibly the most spectacular slot canyon in the world, the Buckskin Gulch. It also includes the scenic North Coyote Buttes (home of the Wave) and South Coyote Buttes. However this document covers only the Paria River and Buckskin Gulch. Additional information, including permits and reservations, can be obtained at the BLM’s Paria Canyon website or call the Paria Canyon Permits Desk at (435) 688-3246.

Note: Always get a weather forecast before going in the Buckskin Gulch or Paria Narrows! If you get caught in a flash flood there, it will probably be fatal! 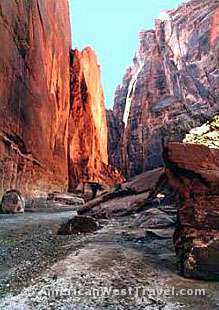 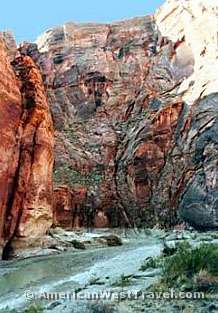 The Buckskin Gulch and the Paria Narrows present many kinds of experiences to their visitors. During some years and during some times of the year backpackers may have an easy jaunt and hardly get their feet wet. During other times the canyons may provide an excruciating journey. And it can all change in an instant. A powerful flash flood can wash away old obstacles and create new ones in an hour. [Photos left and right: Paria River Narrows near confluence with Buckskin Gulch.]

Whatever the conditions, the Paria Canyon Wilderness Area offers spectacular canyon country scenery and an outstanding outdoor experience. The Buckskin Gulch offers the mystery and astounding beauty of the slot canyon. The Gulch ranges from 3 to 15 feet wide over twelve miles and averages 400 feet deep. Eons of flash flooding have carved the sandstone into fantastic formations over its entire length. But usually it’s not easy going.

Our experience offered the most extreme level of difficulty. We chose the first week of April following a wet winter to do the hike; much too early in the season. The weather deteriorated en route, and when we stopped at the Kanab, Utah, ranger station for permits it was snowing. The ranger was not encouraging, saying that all the pools were full and the water temperature was measured at 42°F (5.56°C) a few days ago. But that didn’t stop us! 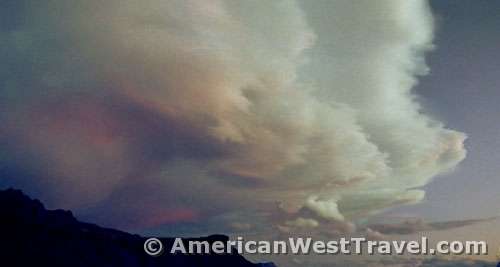 We camped in the scenic campground at Lees Ferry where we would meet our shuttle driver in the morning. The weather (photo, left) did not look too promising. Nor was the weight of our backpacks. With the cold weather we were obliged to carry extra clothes. We also carried two inner tubes for the pools, rope for the obstacles, and two days supply of water. (The water in the Buckskin is not potable.) 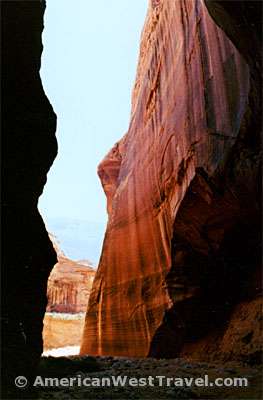 Our shuttle host, a “colorful” local, drove us from Lees Ferry, where we left our vehicle, to the Wire Pass Trailhead for the Buckskin Gulch. She regaled us with her pearls of wisdom the entire way. (Years later, she and her wisdom were featured in Arizona Highways magazine!) The trailhead, at over 5,000 feet elevation was lightly covered with snow and frost. So we would be hiking in heavy clothes.

The “Wire Pass” is appropriately named. A short walk brings us to an entrance which is 18 inches wide! You remove your packs and half-walk half-crawl. It opens up a bit rather quickly (photo right) and soon reaches the Buckskin. The Buckskin Gulch is sometimes referred to as the “Dive of the Buckskin”. This is a description of the canyon’s sharp downward gradient.

We encounter our first large pool no more than five minutes downstream. No more than two feet deep, but we’ll be walking in wet clothes from here on in. 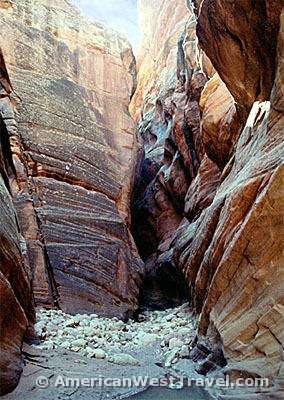 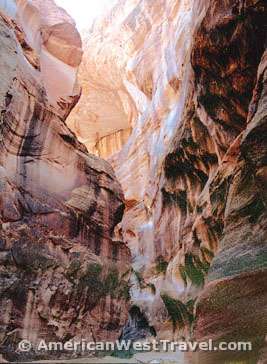 So far, the pools we’ve had to wade have not been more than thigh deep. However we’ve discovered that quicksand occurs even beneath pools of water. It’s quite shocking to step in quicksand while wading a pool and suddenly sink a foot or more. Most of the quicksand holes appear shallow. However there was one pool of quicksand deeper than my walking stick which was six feet long.

As we progressed downstream there were sections of canyon amazingly deep (photo right). These tall walls combined with the narrow channel were a fantastic and surreal spectacle. Occasional open areas with a little sunlight and vegetation did occur but they were usually choked with rubble and boulders making the going very difficult. Packs had to be removed several times to scramble down minor rockfalls. 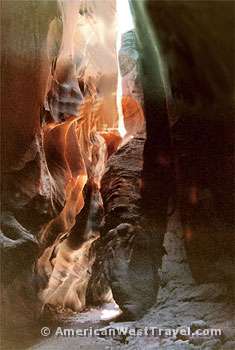 At midday, when a little sunlight penetrated the canyon, we were frequently treated to very exotic lighting effects (photo left). Unfortunately, due to the circumstances, it wasn’t often possible to stop for a picture.

We camped the first night on a safe slide area about ten miles from the starting point. It was well above the channel but with very little room to move about. Gerry awoke in the morning to a mouse pancake. The mouse had tried for the food but Gerry rolled over in his sleep. End of story.

Our luck finally ran out the next morning when we encountered an enormous pool in a narrow section. It was too deep to wade and filled the channel as far as we could see, perhaps 100 yards or more. This was truly frightening. It was dark, cold, and the water was freezing. Our plan had been to rope the inner tubes. I would go first, pulling my gear on the second tube. Gerry would hold a rope to pull the tubes back and repeat the process after I crossed. We could only hope the ropes were longer than the swimmable section. Then there was the hypothermia threat. The process would be slow, and we’d be exposed to the icy water. 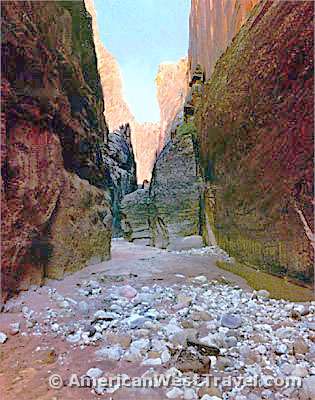 We spent well over an hour inflating the tubes, making sure all plastic bags were sealed, tying everything together. After all that, the swimming section was only about ten yards, the remainder about hip deep. Despite the tubes we were immersed in the water. (In these conditions, you need a wet suit!!) The pool went on for well over 100 yards. We reached an open area with some brush about a half hour later. At this point I was well into hypothermia, shaking uncontrollably and stumbling around drunkenly.

Fortunately we got a fire going with some brush. I had most of my clothes off so I could expose myself to the heat. I tried to get my clothes near the fire to dry off. In my shaking state, my wool socks go up in flames and the top of my pants are singed.

By late afternoon we had progressed about two miles for the day. We arrived at the Dive’s major obstacle at mile 15, a huge rock jam. The dropoff at that time was well over twenty feet. However the ranger said there was a way down so we did not bring any climbing gear. In our exhausted state we simply could not find the way. We have to camp here for the night and sleep in a tiny rock alcove (two feet high) with all the mice.

Refreshed by a night’s sleep, we find the solution almost immediately. A chimney (a narrow rock chute) hidden by some brush offers quick and easy access to the bottom. Beyond the rockfall the going becomes really easy and we reach the Paria River in less than an hour.