The Painted Desert of northeast Arizona is a colorful fantasyland of mesa, buttes, and badlands. The area is covered by the “Chinle formation”, a very soft layer of earth consisting mainly of mud, sandstone, and volcanic ash. The softness allows for fantastic erosion effects as well as colorful staining by mineralized water flows and mineral deposits over the eons.

Geologic forces have pushed land from 220 millions year ago, the “Triassic” era (just before the more well-known “Jurassic” era), very close to the surface here. As the Painted Desert erodes, the fossilized artifacts from that ancient time become exposed. Most notable are the remains of a huge conifer forest which dominated the lush Triassic landscape and now literally litter the landscape as the Petrified Forest. This is the world’s largest – and absolutely most beautfiul – concentration of petrified wood.

The covering of the Chinle formation created an ideal environment for the fossilization of wood. The layer of volcanic ash contains many minerals especially silicon. As the minerals seeped into the wood, the fossils assumed their many colors. The silicon crystallized, creating beautiful gemstones within the wood. The reddish-brown outer surfaces on most of the logs are not bark which does not fossilize. It is coincidentally iron oxide (rust) which has the same color. See the beautiful cross sections below. 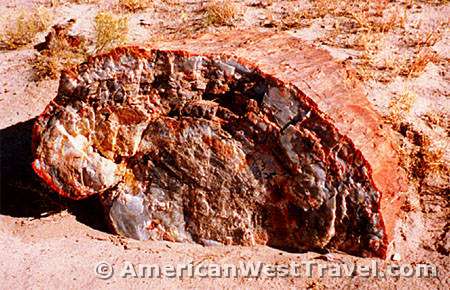 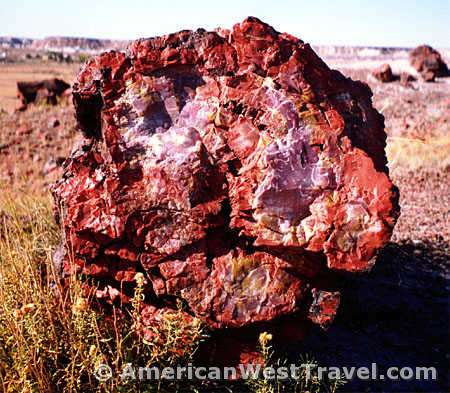 Note the beautiful quartz pieces in both cross sections. Amethyst is frequently found. Vandals have cut the gems out of many of the park’s best pieces. 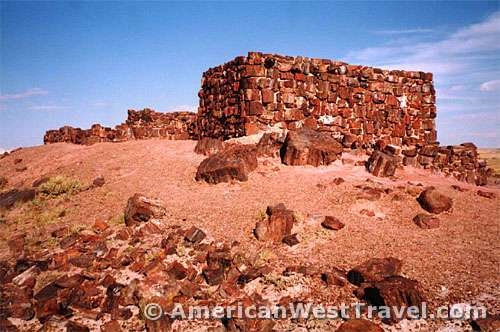 The park also contains remnants of ancient human inhabitants. [Photo, left] A reconstruction of a small pueblo built with petrified wood rather than the usual adobe bricks. A real log cabin! 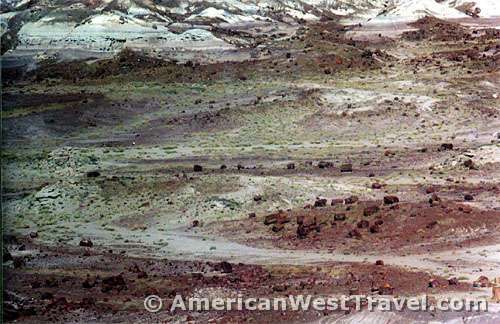 A bizarre panorama of the so-called Jasper Forest. The colorful desert is completely littered with petrified wood as far as the eye can see. 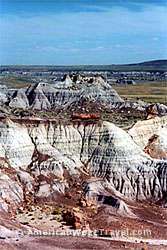 The “balanced” log on top of a ridge off of Blue Mesa gives a clearer understanding of erosion. The ridge is simply the remnants of what was once a solid layer of the earth. The log was originally buried in the layer but erodes far more slowly.

As the ridge has continued to wear away, pieces of the tree are tumbling off onto the valley floor [Photo, right]. 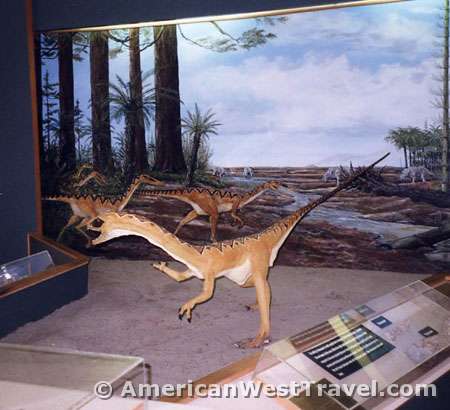 The Petrified Forest has of course yielded up many other fossils besides wood. The Triassic era was the dawn of the age of the dinosaurs. The early dinsoaurs were small creatures which were dominated by the many great reptiles which inhabited the swamps of that era.

During the 1980’s scientists discovered Coelophysis [Photo, left] here at the park. At the time it was thought to be the first dinosaur to walk the earth. Older dinosaurs have since been discovered elsewhere but Coelophysis remains one of the earliest.

The park is located near the town of Holbrook, Arizona. One of the last remaining sections of fabled Route 66 still runs through its downtown. Shown right is the Wigwam Motel. It was, is, and probably always will be one of Route 66’s most famous landmarks. (And people still do stay in the teepees even though the motel now offers standard rooms as well.)

About the Painted Desert and Petrified Forest National Park 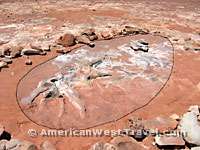 Petrified Forest National Park is in northeast Arizona off of Interstate-40, about 25 miles east of the town of Holbrook, Arizona. The park offers some of the best and most accessible scenery of the Painted Desert which runs from the northern part of the park in a northwest direction towards Lake Powell. More good views of the Painted Desert can be found along US-89 north of Cameron, Arizona heading towards Page and Lake Powell. Additional views, as well as dinosaur tracks and fossils (photo, right) can be found by turning east on US-160. The dinosaur exhibit is just west of Tuba City.