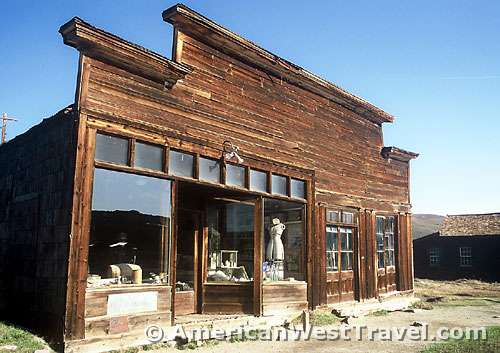 The Boone General Store, on the far side of Green Street, built in 1879. Right side of building housed the garage and gas station. 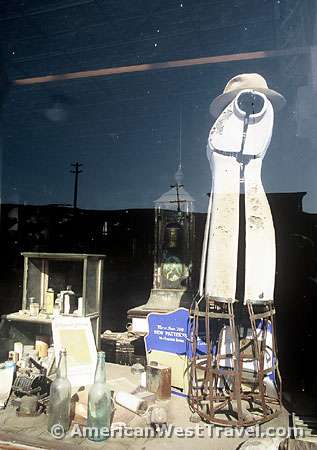 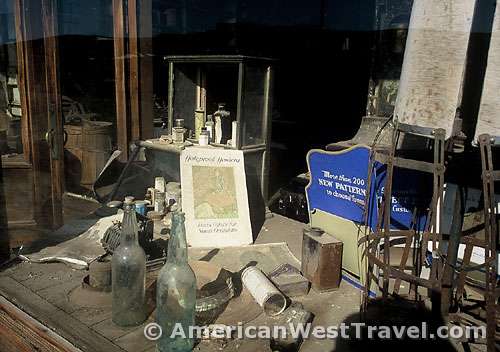 [Photos, Above] Show window at the Boone General Store with original contents.

A fire largely destroyed Bodie’s downtown in 1892, and a second major fire in 1932 destroyed most of what remained of the town. Most of the few remaining people left after that. The town was completely abandoned around 1950. (I viewed a wall calendar in the garage through the window which appeared to read 1947.) It became Bodie State Historic Park in 1964. The 170 remaining buildings (about 5% of the total during the heyday) are maintained in a state of “arrested decay”, that is, their condition at the time they were abandoned. Many of the buildings are still furnished, and the contents can readily be viewed through the windows. Entry into most of the buildings is prohibited. Old mining equipment is strewn about everywhere. 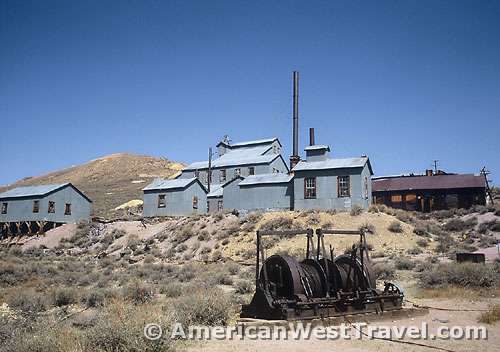 The success of the Standard Mine and Mill, left, precipitated the Bodie stampede.

A visit to Bodie today is a special experience. The site’s remoteness and dirt road access (the last three miles) assures limited visitation. The park has no visitor amenities other than a parking lot and restroom a short distance from the town. There are no interpretive signs in the town itself. It simply sits there in its abandoned state, a true ghost town. As you stroll the dead-quiet dirt streets, you must imagine what it was like to live here over a hundred years ago. 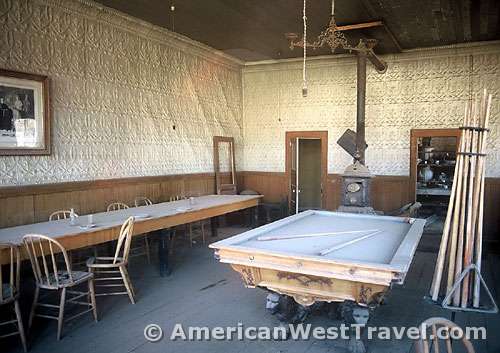 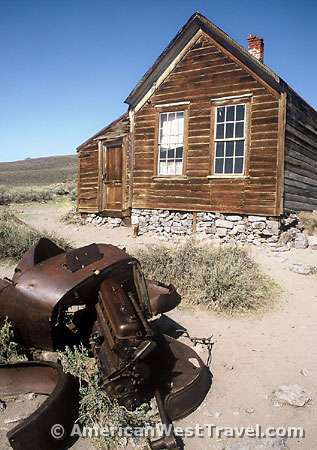 Left, the poolroom and bar at the Wheaton and Hollis Hotel. Right, the Henry Metzger House. Metzger was typical of many miners who never got rich and lived an average life in Bodie while raising a family. He arrived in 1878 and worked for the Standard Mill, becoming a foreman by the time the mine closed in 1916.

Bodie is located in sagebrush foothills at the base of the great Sierra Nevada range at an elevation of 8,375 feet. Winters here are long and ferocious with huge amounts of snow and below zero temperatures. The treeless slopes offer no protection from the wind. Back then, death from exposure and disease was quite common. The many months of winter isolation certainly exacerbated the murders and other wild behavior. Today, it means that Bodie is generally accessible by a family vehicle from mid-spring through mid-fall. 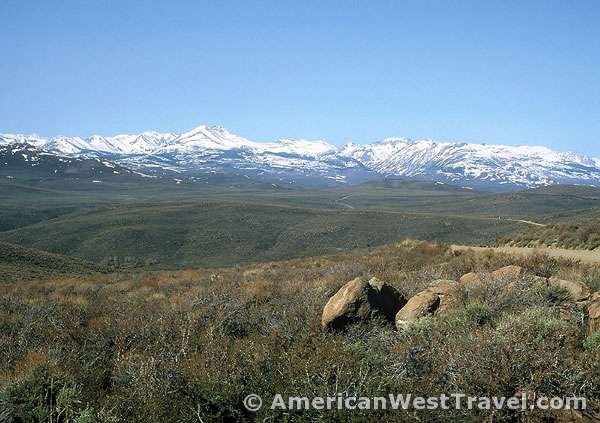 The park’s access road leaves US-395 about 82 miles south of Carson City, Nevada, or 20 miles north of Lee Vining, California, the eastern entrance to Yosemite National Park. The access road is 13 miles of very scenic driving, the last three on dirt. The return drive provides absolutely spectacular views of the Sierras. One mile north of the US-395 junction, the Virginia Creek Settlement provides very nice lodging, camping, and a restaurant featuring Italian food. For information, call 760-932-7780.

For information on visiting Bodie, including accessibility, visit the Bodie State Historic Park’s website or call 760-647-6445.

“Eastward, beyond the surf of the Pacific, beyond the tawny rolling Coast Range and the wide central valley of California, rises the great wall of the Sierra Nevada. Four hundred miles long, seventy-five miles wide, ten to more than fourteen thousand feet in height, it ranks with the major mountain ranges of the world.”