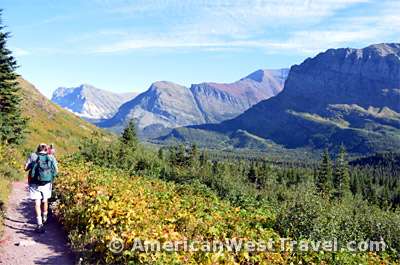 September 7. We need an early start this morning as we’re heading to the Many Glacier region, the most popular area of the park with the most popular campground which is known to fill up by noon or earlier, sometimes much earlier. We arrive about 8:30am and, sure enough, there are already cars circling around looking for sites. We grab the first obviously open site even though it’s pretty cramped in next to two other sites. Fortunately, it’s in the “no generator” loop. Huge RVs with loud and oft-used generators are probably the most repulsive objects in the world of camping. It speaks far more however to the selfishness of the RV owners or renters. Diligent RVers make an effort to use modern quiet generators or maximize their usage of propane and storage batteries. (Generators are only needed to run the RV’s A/C, microwave, or electric outlets.)

We have big plans for today’s hike. We’d like to visit for the first time two of Glacier National Park’s most iconic places, Iceberg Lake and the Ptarmigan Tunnel. To visit both of them will require 14.8 miles (24km) of hiking with a 2,900-foot (884m) elevation gain. We haven’t done a comparable hike in over seven years. I talk to both the ranger and campground host who both urge us to go for it. Due to the coming bad weather, we have this one day, and then that’s the end of it. At my age, who knows if there will be a next time.

Well, we went for it, and it was an epic day in our career of outdoor adventures. This hike and these great places will be covered in detail in a separate article.

We made it back to civilization well after 6:00pm, in one piece but completely exhausted. We got a couple more of those Montana beers from the grocery and enjoyed them on the porch in front of the store. Later we ate lightly; I was too exhausted to have much appetite.

September 8. I have a blister on my left little toe that is bigger than the toe, and I can barely walk. The hiking boots get packed away; the rest of this trip will be R+R. On the other hand, my appetite is back with a vengeance. We’ll take the time for a big and hearty camp breakfast (even though it’s about 37°F/2.8°C outside – you get used to the cold): eggs, ham, bagel, hash browns, and plenty of fresh fruit.

We have plenty to do today: drive back to Kalispell to pick up the dog, restock at the supermarket, get gas, and use the wi-fi at the Columbia Falls public library. We decided to drive around the southern end of the park via US-2 on the way back. It was beneficial to see some new areas but it was a long drive and some sections were rough and slow. The mountainous Two Medicine region in the southeast corner of the park seemed very inviting. It is the one part of the park we have yet to explore. We have to go back into the park at West Glacier to return the bear spray. The crowds at the entrance station and visitor center are hugely diminished, due to the bad weather forecast and the start of services’ shutdown for the season (the shuttle buses stopped on September 7).

By the time we do all the chores and pick up the dog, it’s after 4pm and time to figure out where to stay for the night. Nearby Flathead Lake offers a number of state parks with camping. They won’t take my senior card but we can’t be particular at this late hour. Besides, the state of Montana charges only $23 for camping which is perfectly reasonable.

We head over to Wayfarer’s State Park near the town of Bigfork on the lake’s northeast corner. It is a well-maintained park with a nice campground on a small hillside. The services’ building has bathrooms, showers, even a campers sink. Plenty of hot water. The bathroom is even heated.

The evening is quite mild along the lake, and the bad weather hasn’t arrived yet (though it could be quite different up in the mountains). Lying in the back of the truck, we have a nice view of the lake. I can see the traffic light in central Bigfork across the bay. Eventually I figure out the red/green sequence. Much later that night the light is flashing a hypnotic orange. 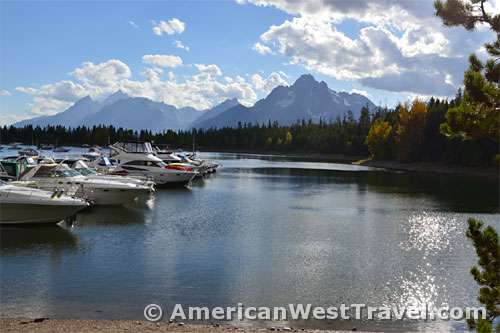 September 9. Our plan for today is to do a lot of hard driving to position ourselves to enter Yellowstone National Park the following day. Because of the cold weather forecast we would spend only one night there (if possible) or simply spend the day and keep driving south.

We continue to drive south alongside Flathead Lake. The route will merge with US-93 at the south end of the lake with a straight shot down to I-90. This area east of Flathead Lake is a micro-climate supporting the successful growth of cherry trees. We pass small orchard after small orchard. There are many stands but none open – cherries are harvested in late spring. One year we were up here in late June and got delicious cherries from a stand.

As we reach US-93, we come upon an enormous Walmart Superstore that seems quite incongruous in this rural area. We decide to stop for a few things we need (like propane cylinders and more warm socks). The store is brand new, apparently recently opened, and positively immaculate. I wish our local stores were half as nice.

Eventually, we are on I-90 heading east. Western Montana is beautiful mountain country but the big semis are all over the place, and you have to pay close attention to driving. There is a convoy of cattle trucks, and the smell is positively disgusting. As we drive, we decide to stop for the night at the Bozeman KOA on US-191. This leaves about 100 miles (161km) to Yellowstone. However we’ll be able to do our laundry there and also get showers. And we’ll be able to stop early.

The Bozeman KOA was very nice and well-kept though mostly an RV park. They did have a nice grassy section for tenting and small vehicles, well away from the big rigs. There was also a huge bonus: KOA visitors got a discount ticket to visit the adjacent Bozeman Hot Springs. The springs had been a place of recreation for generations. It’s now built into a luxury health club which has about nine pools of varying temperatures using the natural spring water.

We got our chores done, and the bitter cold front starts howling in while we’re making dinner. Well, we ate quickly using the truck as a wind break. We then put the dog to bed (where he was quite glad to go) and headed over to the hot springs. What a treat, especially with the raw weather moving in! Besides the thermal pools, they had sauna and steam room, as well as showers. It was a wonderful break from the routine of camping.

September 10. It had become overcast during the night and thus hadn’t become too cold. We decided to skip breakfast and get an early start. The route was slow in some places, fast in others, but mostly tedious. We arrived in West Yellowstone around 10:30 and decided to have breakfast. We found a popular pancake place where we had to wait in line to be seated. They ended up screwing up our order royally (we obviously got the newbie waitress). On the other hand they forgot to charge our coffee (a pricy $4.30 for two cups). I thought that was fair compensation for their embarrassing service and didn’t mention it.

We had been to Yellowstone three times previously: in 1974, we got cabins without reservations and easily toured the park; in 1990, we got campsites without reservations and easily toured the park; in 2002, we found terrible traffic and mayhem at the campgrounds and pushed on to Grand Teton. What we found this time was despicable: campgrounds full long before noon, bumper-to-bumper traffic, road-closing construction projects in the face of extreme congestion, parking lots jammed full so you couldn’t stop at attractions or viewing areas, and a paucity of wild animals that have probably become conditioned to stay away from the human mayhem. The only choice for us was to drive on.

We stopped early at Colter Bay Campground in northern Grand Teton National Park (closest to Yellowstone) to rest off the driving stress. This was a concessionaire-run campground which always makes me leery. We thought we had a tenting-type campsite: the site had a tent pad, and a sign said “Loops A-G, No Generators”. It was very pleasant and not very crowded. Around 4:00pm we took a walk to the visitor center and village. When we returned, the loop was full of RVs, many of whom were running generators. Our complaints fell on deaf ears but the proprietor was happy to refund our money – his campground was full. Apparently, Colter Bay is now the RV overflow area for Yellowstone.

So it’s after 6pm and we’re out looking for a place to stay for the night. We drive thirty-plus miles to the Gros Ventre Campground at the far southern end of the park, and luckily got one of the last open sites. Vehicles were buzzing around until about 9pm looking for a place.