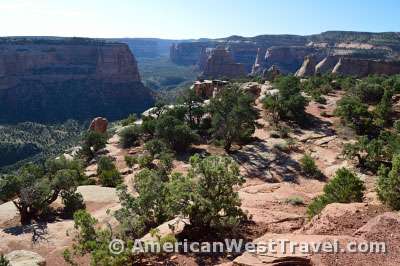 September 11. Next morning it’s freezing cold (starting at 30°F/-1.1°C, then dropping to mid-20s°F/-6.7°C while driving), we’re completely disgusted by yesterday’s events, and decide to head straight south until we reach warmer weather. Yellowstone and Grand Teton National Parks are off my list; we don’t need that kind of aggravation. I’ll simply say we were lucky enough to see these places years ago when things were still good.

Our plan is to head straight south on US-191 through Wyoming and into Utah, and then on to southwest Colorado which I always enjoy and should have mild temperatures.

We did have an interesting breakfast in Pinedale, Wyoming at the Stockman’s Restaurant. Its ancient structure – both inside and out – had clearly seen better days and reminded me strongly of The Last Picture Show. The restaurant also offered a drive-through liquor store. Near the restroom, there was a gilded saddle in a display case which was inscribed as first prize in a 1974 bareback riding contest. Huh? And then there was an old-timer sitting by himself in a corner wearing a huge black cowboy hat and simply staring. It was most peculiar ambiance but the service was good and the food was good, and quite inexpensive. So who can complain?

Traffic was pretty brisk on US-191 until reaching the city of Rock Springs on I-80. South of the interstate, US-191 becomes lonely open road, 68 miles to the next town, almost no traffic, and very pretty canyon country. This was desert here, and the temperature was now much warmer. Approaching Flaming Gorge Reservoir, we took the turnoff to Antelope Flat Campground, three miles on a dirt road to the middle of nowhere, for a lunch break. We had camped here with my parents more than twenty years before and had the place to ourselves. It wasn’t much different this time though there were a few people around including, oddly, a campground host. There were fine views of the lake and shirtsleeve temperatures.

From there, we drove across Flaming Gorge Dam and then tediously crossed the Wasatch Mountains. The descent into the desert and Vernal requires ten huge switchbacks. Since my last visit here, the valley below has been turned into some kind of enormous open pit mine and looks like a lunar landscape. At Vernal, we head east on US-40, intending to camp for the night at Dinosaur National Monument. However even though it’s getting late in the day, we feel like driving some more and push further south.

Our new goal for today is Colorado National Monument near Grand Junction, Colorado, adding another hundred miles of driving. This would include driving Colorado-139 between Rangely and Loma, Colorado. This is one of the nation’s longest stretches of open road, 72 miles with little traffic and almost no structures. Unfortunately, the route crosses a mountain range with a slow, steep, and somewhat scary drive over an 8,400-foot (2560m) pass. The steep winding road has no guard rails and huge drop-offs. It’s almost sunset by the time we reach the campground. Luckily there are plenty of open campsites, and the weather is much warmer.

This was the only night on the trip that we had to break out our propane lantern to make dinner. The nearly full moon rose about an hour later, and it was a beautiful night to sit outside. 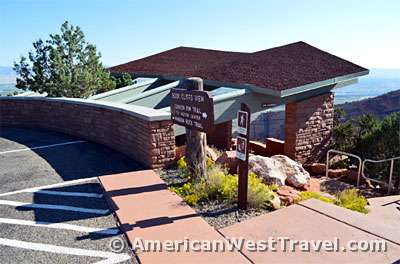 September 12. Colorado National Monument is a freestanding mesa with its flanks carved into colorful red sandstone canyons. So it is rather similar to the canyon country of nearby Utah. The top of the mesa is semi-arid, covered with a light forest of mainly juniper trees, plus desert scrub. The park is lightly visited with most of the campers being overnighters from nearby I-70.

The monument has one very special attraction which few people know about. At the edge of the mesa there is an old-fashioned lookout called BookCliff Shelter. It is a covered viewing area where one can sit and look out at the canyon with the mountains in the distance. The city of Grand Junction is also in the view. At the time the lookout was built (50 years ago) it was a small town. Now it is a city of 60,000 people. Therefore it is the nighttime view that is the bomb – the lights of the city framed on three sides by the pitch-dark canyon and also the stars above. One can enjoy this fantastic and romantic sight in dead silence and privacy. The lookout is on a completely dark road about a half mile from the campground. Besides not knowing about it, most people are not inclined to walk on a dark road at night. It is a secret place that rivals any of the vistas in our more well-known national parks. So we have a good reason to stay here.

We decide to camp here for another night but plan to do a little touring and shopping during the day. We head east on I-70 as far as Glenwood Springs. This is an extremely scenic section of interstate which stays in the gorge of the Colorado River for many miles. The tour takes far longer than expected as there was quite a bit of road construction. On the way back we stop at the town of Palisade, the center of Colorado’s wine industry and fruit industry. There are many wine tasting rooms and fresh fruit stands. We stop at the first winery off the freeway and taste some excellent wines at no cost. (In pretentious California, you pay plenty to do wine tasting.) We show our gratitude by buying a very reasonably priced bottle.

Back at camp, we rest up, eat dinner, and wait for dark to head over to the BookCliff Shelter…

September 13. At this point in the trip we don’t have a set schedule and don’t need to be anywhere so we take our time getting up and making breakfast. A brief and isolated rain shower at dawn has little effect. It’s now sunny and dry and mild. Soon most of the campers have pulled out or are off touring, and the campground area is silent.

We end up spending the day around camp and not driving anywhere at all. While the first part of the trip was busy doing things every day, the second part is clearly R+R. It’s simply finding a beautiful place where one can kick back and relax. Evidently we find Colorado National Monument to be such a place.

After dusk, we once again head over to BookCliff Shelter. Gerry points out that the local townies might know about this place and being Saturday night we might possibly have some company. Sure enough, after only a few minutes, we hear some people approaching. I flash my light to let them know someone else is here.

Three young adults, all early twenties, come in and have a seat on the retaining wall rather than the benches. They’re making small talk, and I can sense their unease. It’s obvious what they want to do. I’m about to tell Gerry that we’re cramping their style when one of the kids asks what do we think about pot. I immediately give him a thumbs up and tell him its fine. After all, it’s their state. He replies do we mind if they smoke some pot. I reply that if they’re inclined to share, we’ll all get along fine. And indeed we all got along fine.

As we left, the moon rose, huge and orange, a gorgeous sight.

September 14. We’re still not ready to leave and sign up for another night. At $10 per night, it’s quite a bargain. Our plan is to get out today, do some shopping, and return to Palisade. We hope to hit some fruit stands, stock up on fresh fruit, and then perhaps visit a couple more wineries.

The farm stands are flush with their harvest, primarily tree fruits such as peaches, plums, nectarines, apples, and pears. They also had plenty of vegetables such as tomatoes. And various canned goods such as jams and salsas made with local produce. And plenty of samples.

The first proprietor tells us that the Sunday Palisade Farmers Market is going on right now in the nearby downtown area. So we head over there. We bring along our dog, Emmitt the basset hound, who immediately becomes the center of attention. We also bought more fruits and vegetables, especially some great peaches.

An elderly lady has a large charcoal cooker set up and is offering hamburgers, hot dogs and brats. She’s offering two hot dogs for $5, and mistaking the huge brats for the dogs, I order two hot dogs for us. She immediately throws two puny dogs on the grill. I point at the great looking brats and say, “I want those.” Says she, “Well, those are brats.” She ended up giving me the brats for a couple of bucks off. They were terrific, especially with her grilled onions and peppers.

Temperatures are pretty toasty down in the valley – about 90°F/32°C – so we head back to camp, taking some of the scenic route. It’s warm back at camp, too, and we spend the afternoon moving around with the shade.

After dusk, we again head to the BookCliff Shelter. This time no one bothers us.