The First Detonation Of A Nuclear Weapon 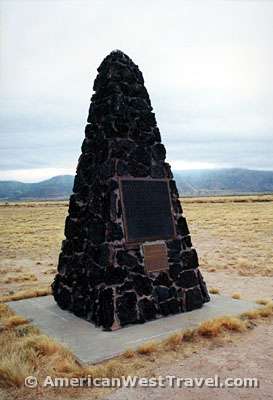 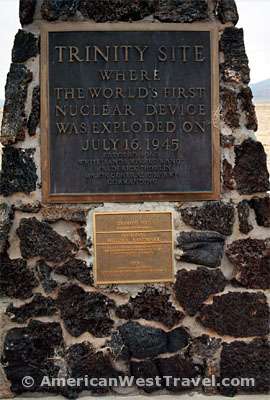 On July 16, 1945, the world was ushered into the atomic age with a blinding flash. At 5:30 a.m. that day, the first atomic bomb was detonated at a site called Trinity, about 50 miles southeast of Socorro, New Mexico. All life on earth has been touched by the event which took place here.

The gold plaque below it declares the site a National Historic Landmark, and reads:

“Trinity Site has been designated a National Historical Landmark, This Site Possesses National Significance In Commemorating The History of the United States of America, 1975, National Park Service, United States Department of the Interior” 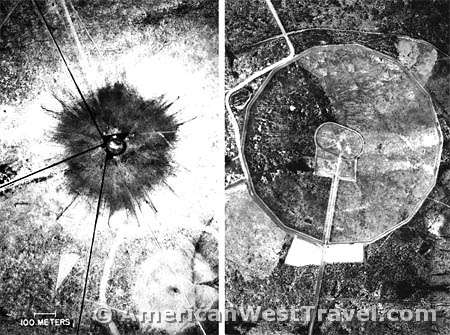 At right, photos then and now. The left photo was taken 28 hours after the detonation. The scale at lower left is 100 meters. The crater is circled. The right photo is the contemporary site. The circular fence encloses the blast area; the oval fence is Ground Zero.

In the panorama photo, above, Ground Zero is enclosed by an oval fence. It encloses the point of detonation marked by the obelisk (circled) and the crater created by the fireball which was about 100 yards across. The shallow radioactive crater was cleaned up and filled in 1952. The low shed beyond the pickup truck preserves a small section of the crater. 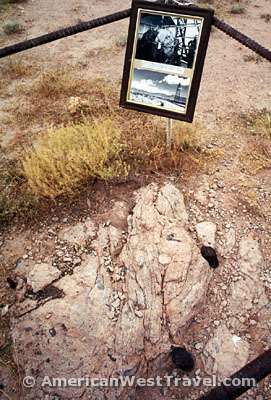 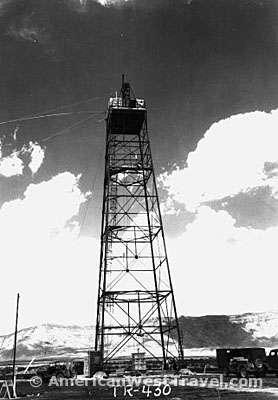 Since 1953, the White Sands Missile Range has conducted open houses at Trinity Site which was designated a National Historic Landmark in 1975. On the first Saturday of April, visitors may tour Ground Zero (above) and the historic McDonald Ranch where the Bomb was assembled. And thousands of people show up to visit Trinity.

(Photos, left. The Bomb was detonated atop a 100 foot tower. Far left, a little bit of the tower’s footing still remains. There was originally more exposed steel pipe and rebar but it was cut away. The footing was not completely vaporized like the rest of the tower because it was packed in concrete.)

Surprisingly, the mood at the open house is quite festive, almost carnival-like. Off-duty military personnel are selling hamburgs, hot dogs, and hot drinks (luckily, because it’s a cold, bitter day). Vendors hawk “mushroom cloud” t-shirts and other souvenirs. Someone else is selling books. One might have expected a somber mood here. On the other hand, perhaps we feel pretty good about surviving it all. The decades of having the threat of nuclear annihilation hanging over our heads have faded. There clearly wasn’t much of a fear factor in evidence today. And the horror of dropping one of these devices on people, even in a righteous cause, is too many decades removed for most people to closely contemplate. 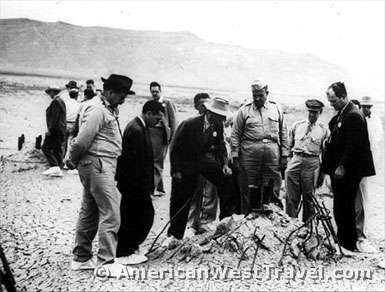 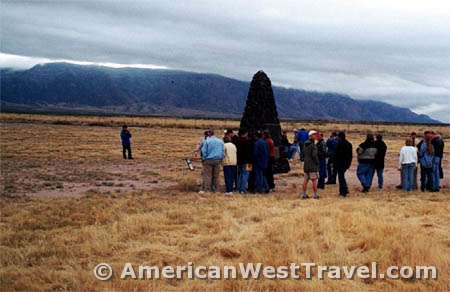 In the photo above left, the press is shown contemplating Ground Zero for the first time on September 11, 1945. Dr. Robert Oppenheimer (center, in the white hat), scientific director of the Manhattan Project (to develop the bomb), explains things. Next to him is General Leslie Groves (the portly soldier), the project’s military director. Note the protective footwear being worn. The surface of the crater, which looks like cracked mud is actually a unique substance called trinitite. The heat of the fireball fused the plentiful silicon in the desert sand creating this glass-like substance. The trinitite was radioactive, and most of it was scraped away during the site clean up in 1952.

In the photo above right, visitors contemplate Ground Zero with the Oscura Mountains in the background to the east. One of the tower footings is to the left of the man in the blue jacket.

Is the site still radioactive today? Yes, slightly. There is an emission of 1/2 to 1 millirem per hour in the crater area. This compares with 3 to 5 mrem for a typical coast to coast jet flight or 22 mrem for a chest x-ray.

(Continued on next page…