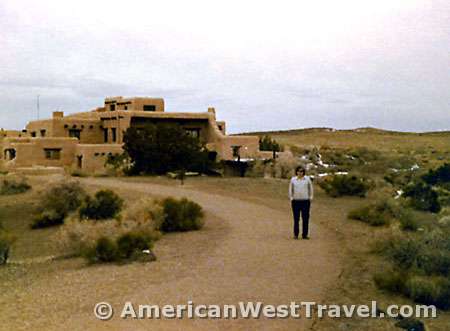 In February 1978, I emigrated from Boston, where I grew up, to California. This was the oft repeated, quintessential American journey of going west to find a new and better life. It was a major moment in my life. We traveled mostly on the interstate highway system which was largely complete at that time. From Oklahoma City, we followed Interstate-40 through the Southwest to Barstow, California, and then Interstate-15 into the Los Angeles area. This route closely parallels Historic Route 66, and this is when we had our first experiences on the now historic route.

[Photo, left: The Painted Desert Inn in Petrified Forest National Park in 1978. The inn is the only Historic Route 66 landmark protected by a national park. This hazy snapshot is one of my few mementos from that long-ago trip.]

Numerous towns along the way were accessed by “I-40 Business Routes.” These routes were generally segments of Route 66 by which you entered one end of the town, drove through the downtown area, and then returned to the interstate on the other side of town. That was your route if looking for a place to stay or eat. Today, nearly every major highway interchange in America has a selection of motels, restaurants, mini-marts, and other travel services close and convenient to the exit. This was far less so in 1978.

At the time there was only one major piece of Interstate-40 yet to be completed, the section between Seligman and Kingman, Arizona. You had to detour onto Route 66 at Seligman and drive its 80-mile segment to Kingman. This piece of the interstate was completed and opened later in 1978, bypassing this last long segment of the old highway. So it could be said that we got in at the tail end of the “real” Route 66 experience. (The final piece of I-40, bypassing Route 66 in downtown Williams, Arizona, opened in 1984.)

However in 1978 Route 66 was not really viewed as historic or nostalgic. Interstate-40 had largely opened and bypassed the route through the Southwest in the early 1970s. It simply wasn’t gone that long. There was no plethora of museums and visitor centers along the old route, as there is today, none of those brown signs along the interstate indicating an exit with Historic Route 66 access, no abundance of literature, no Internet with an endless number of websites about the subject.

So driving across the country in the middle of winter, we were not looking for “kicks on Route 66.” The experiences we had were incidental to the trip.

On a more recent trip (2010) I met an elderly gentleman from Georgia at the beautifully reconstructed Cool Springs Station, on Route 66 west of Kingman, Arizona. He and his wife were taking a commemorative trip along Route 66, marking his original trip out west by the same route in 1954. A sign on the side of his pickup proudly described his story. I asked the man how today’s Historic Route 66 compared to the route back then. He replied that he had little recollection of what it was like in 1954. Of course, that’s because he was then living what is today’s history. Traveling across country town to town on two-lane roads was the way of life back then. Quaint motor courts, mom-and-pop stores and businesses, oddball attractions were the norm. So nothing made a particular impression on him. He was just heading west, and I understood that completely.

On the other hand, when one takes a nostalgic trip on a historic route, or if you are taking a life-changing trip, then everything makes an impression.

I do in fact remember everything about my cross-country trip in 1978. It was a major moment in my life and one of my best adventures, something you can only do when you’re young. We simply closed out our affairs in Boston and left. There were no jobs waiting in California, no place to live. There wasn’t even a specific destination or a specific timetable to get there. We were living out on the road, driving a beat up old car, and the only constraint was having very little money.

Below are my 1978 Route 66 remembrances (listed in order, east to west) with some notes as to the present-day conditions.

Today the Route 66 Experience is both nostalgic and historic, especially in the Southwest. There are good reasons for this. Wherever you go in America today, you will encounter the same motels, the same restaurants, the same gas stations, the same mini-marts, the same supermarkets and department stores, the same cable TV stations, the same Internet. Corporate America has largely put mom-and-pop out of business. Now that everything is largely the same, we miss the individuality that has been lost. We all yearn to see the quaint motor courts, the mom-and-pop stores and businesses, those oddball roadside attractions, and remember what was once upon a time.

Everyone dreams of finding the wide-open spaces of the American West, and enjoying the freedom of the open road. It was still fairly easy to find wide-open spaces and open road in 1978. But things have changed since then. The American West, especially the Southwest, has undergone excruciatingly intensive development. Its population has doubled. Highways teem year-round with tourists and travelers from all over the world, not to mention the endless parade of nerve-wracking semis. It’s not an easy environment in which to kick back, relax, and enjoy the open road – you’ve got to find the right places to do it!

Americans cherish freedom and individuality above all else. Perhaps those are the kicks we want from Route 66.