Returning from our recent West Coast road trip, we decided to get some kicks on Historic Route 66 while returning to Phoenix, sampling segments that veered away from Interstate-40 and into a different world. Northwest Arizona features two long segments of Historic Route 66 that veer well away from Interstate-40. Going west to east, the first is a 53-mile stretch from the Topock exit (mile 1) on I-40 to Kingman, Arizona. If features beautiful desert mountain scenery and an old west town that refused to die. The second is a roughly 110-mile segment from Kingman to just west of Ash Fork, Arizona. It features a higher elevation with more moderate summer temperatures, access to Grand Canyon attractions, and other cool things.

Towns of Valentine and Truxton, Arizona

East of Hackberry, Historic Route 66 passes the townsites of Valentine and Truxton before arriving at Peach Springs, the capitol of the Hualapai Nation. The old Bureau of Indian Affairs school in Valentine is surrounded by a chain link fence but you can get a photo over it. A new attraction is the Keepers of the Wild Nature Park, a sanctuary for rescued exotic animals, open for public touring. the classic Frontier Motel is still doing business in Truxton. 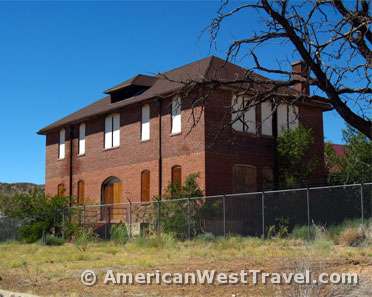 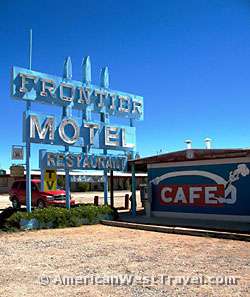 The center of activity in Peach Springs is the Hualapai Lodge and visitor center. The Hualapai Nation is a major player in Grand Canyon tourism since the opening of their Grand Canyon Skywalk, a glass-bottomed walkway which extends over a part of the canyon. The nation also offers popular one-day raft trips featuring a helicopter ride out at the end of the day. The Diamond Creek Road leaves Route 66 at Peach Springs heading north. The road offers the only vehicle access to the bottom of Grand Canyon. Visitors may purchase a permit to use the road.

East of Peach Springs, the Hualapai Hilltop Road heads north. The hilltop is the starting point for trips to wondrous Havasu Canyon in the Havasupai Nation. Generations of Grand Canyon visitors have enjoyed the spectacular waterfalls in this beautiful side canyon. 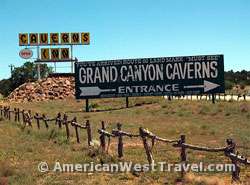 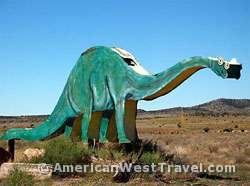 [Photos, Entrance to Grand Canyon Caverns. Who knows the significance of the dinosaur?]

Continuing east, the next attraction is the Grand Canyon Caverns, the largest dry cavern in the U.S. Access to the cave bottom is by elevator, and there are several guided tours. The long-time attraction also has a motel, restaurant, and campground. The new and very unique Cavern Suite at the bottom of the caverns is available to guests (who can afford $700 per night)

The next stop down the line is beautiful downtown Seligman, and they’ve got it all going on here. The Historic Route 66 movement got its start in Seligman when in 1987, local businessmen led by the town barber, Angel Delgadillo, formed the Historic Route 66 Association of Arizona. The town did not wish to die after being bypassed by the interstate. The group lobbied the State of Arizona which designated Route 66 as a historic highway in 1987. The downtown Seligman Historic District was placed on the National Register of Historic Places in 2005. 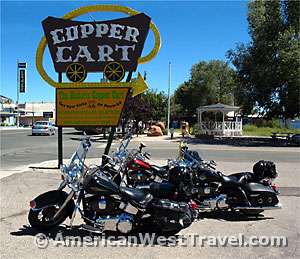 Seligman’s downtown district is either a Route 66 theme park, or shrine, depending on how you look at it. The historic businesses are well cared for and dressed up with plenty of memorabilia and antique items. Busloads of tourists come to check it out.

[Photo, right: The historic Coppercart Restaurant in downtown Seligman. The motorcycles are posed with the sign because Historic Route 66 in Arizona is a big favorite with bikers.]

[Photos, below: Historic Delgadillo’s Snow Cap is clearly a Historic Route 66 shrine. An old fashioned burger and malt shop is in the front while the rear of the property holds a huge stash memorabilia from the good old days. The juiced-up car is but one of many in the back.

Delgadillo’s Barber Shop is in the next block (though Mr. Delgadillo has passed away). Like many of the businesses in downtown Seligman it’s not alway clear if its more than a souvenir and gift shop, with a lot of memorabilia.] 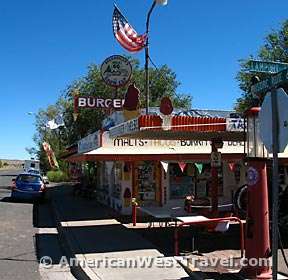 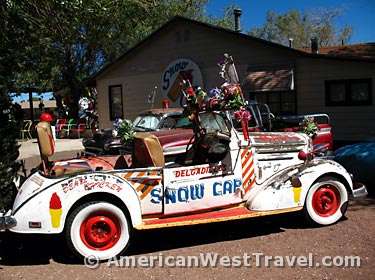 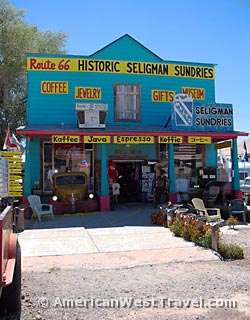 [Photo, left: The Historic Seligman Sundries building has been a mainstay in town since 1904. For many years, it was Ted’s Fountain and Trading Post, perhaps the equivalent of a modern day mini-mart. The most recent ownership changed occurred in 2007, and the business today is as a souvenir and gift shop with plenty of memorabilia on display. They also play all the cool old 1950s music on a loudspeaker.] 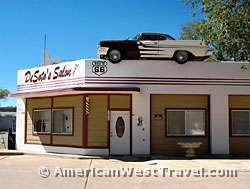 East of Seligman, you have the option of returning to I-40 or stay on Route 66 for another twenty miles. We chose the latter but it was completely nondescript, not a single structure or any sign of life. The route returns to I-40 a couple miles west of Ash Fork. We entered Ash Fork through the I-40 Business Route, aka Route 66.

Part of what was once Route 66 still runs directly through Ash Fork, serving as a main thoroughfare now known as Park Avenue, along which the community’s post office is located. A few historic buildings and some old railroad company houses can be seen along this road.

[Photo, right: DeSoto’s Salon in Ash Fork, Arizona, advertised itself by placing an actual DeSoto on its roof. A classic Route 66 attraction.]

The town was the opposite of Seligman, not much doing at all. There was a small Route 66 Museum but it was closed. The only attraction was DeSoto’s DeSoto, shown above right. As DeSoto’s Salon was closed and surrounded by a chain link fence, it’s unclear how much longer this quirky attraction will last. Note that Route 66 through Ash Fork is divided into two separate one-way streets going in opposite directions. DeSoto’s is on the westbound side.

From Ash Fork, we leave Historic Route 66 and head south for our return to Phoenix.

The exact alignment of Route 66 has varied greatly over the years. For those wishing to trace the exact routes and alignments, The Mother Road, Historic66.com website is an excellent resource.