Returning from our recent West Coast road trip, we decided to get some kicks on Historic Route 66 while returning to Phoenix. (Therefore, this narration differs from others as our drive took us west to east.) We wanted to sample segments that veered away from Interstate-40 and into a different world. Our Route 66 experience through California’s Mojave Desert was that of long, lonely stretches of road broken up by the occasional (nearly) ghost town.

Historic Route 66 through Northwest Arizona offers a completely different experience from California. The route is alive and well with many things to see and a steady flow of visitors. (The route is especially popular with bikers.) There are several reasons for this. The Arizona segments offer diverse scenery and milder temperatures compared to the driving monotony and seasonal heat in the California desert. Route 66 skirts the Grand Canyon east of Kingman, offering access to touring opportunities in the Hualapai and Havasupai nations. Kingman, the southern gateway to Hoover Dam and Las Vegas, is often considered the heart of Historic Route 66 with its numerous attractions and convenient location. Also, the Historic Route 66 Association of Arizona actively promotes the route.

[Photo, above left: DeSoto’s Salon in Ash Fork, Arizona, advertised itself by placing an actual DeSoto on its roof. A classic Route 66 attraction.]

Northwest Arizona features two long segments of Historic Route 66 that veer well away from Interstate-40. Going west to east, the first is a 53-mile stretch from the Topock exit (mile 1) on I-40 to Kingman, Arizona. If features beautiful desert mountain scenery and an old west town that refused to die. The second is a roughly 110-mile segment from Kingman to just west of Ash Fork, Arizona. It features a higher elevation with more moderate summer temperatures, access to Grand Canyon attractions, and other cool things. 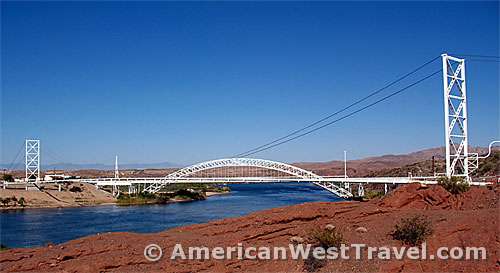 As you cross the Colorado River from California to Arizona, the historic Old Trails Arch Bridge (photo, left, Arizona is left of the river, California, right) is just a few hundred feet south of the interstate’s bridge. It carried traffic from 1916 to 1947, first as part of the National Trails Road and from 1926, as Route 66. At the time of its construction, it was the longest arched bridge in America. The historic bridge now carries a gas pipeline.

Historic Route 66 leaves Interstate-40 at the Topock exit at mile 1 and heads north. The original town of Topock at this site no longer exists, and there are no visible remnants. The small resort-style town of Golden Shores lies about five miles north and offers a variety of recreation with access to the Colorado River. The town’s post office is signed as “Topock, Arizona”.

The Old Trails Arch Bridge was featured in the film "The Grapes of Wrath". The crossings of the Colorado River at Topock, including this bridge, are also featured prominently in the opening credits of the movie "Easy Rider".

[Photo, above: Route 66 wall art in Topock-Golden Shores, Arizona on the side of a gas station.]

The text on the wall reads as follows:

(right) Welcome to TOPOCK-GOLDEN SHORES. This small settlement sits on the east bank of the Colorado River. Headed west, it’s the last stop on the old highway. Headed east, it’s the first. It’s also home to the Trails Arch Bridge as seen in the film, the Grapes of Wrath. An area for fishing, bird watching, and off roading.

(top left) Bob Waldmire, Itinerant artist, bioregionalist and ROUTE66 extraordinaire, was born in St. Louis, MO in 1945 and grew up in Springfield and Rochester, IL. Bob spent 22 years recording the history and attractions of the Mother Road while traveling her pavement in his ‘studio home on wheels’ 1972 VW van. 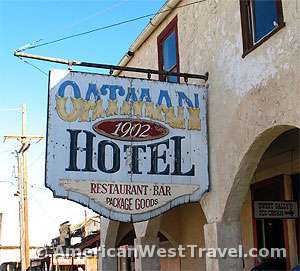 North of Golden Shores, the route soon starts heading into the mountains with very scenic driving before reaching the historic old west town of Oatman, snuggled in the mountains. The town largely features its original buildings, including its main attraction, the Oatman Hotel [Photo, Left]. (Originally named the Durlin Hotel, its name was changed to the Oatman Hotel in the late 1960s.) The hotel isn’t taking lodgers at present but offers a gift shop, ice cream shop, museum, restaurant, and saloon. A large sign in its lobby describes it:

“Our hotel is the oldest two-story building in Mohave County and is registered with the National Historical Society. It was built in 1902. It has housed many a miner, movie star and statesperson. It has been one of the social meeting places for past, and present, residents of Oatman.

“Clark Gable and Carole Lombard spent their honeymoon upstairs, Mar. 18, 1939. They frequently returned to Oatman because they enjoyed the solitude, and Clark played cards with the miners. Governor Rose Mofford (AZ) came to Oatman because, she said, “I simply love Oatman.”

“Please feel free to wander and look around the lobby, upstairs, bar area, and in the lower level is an old mine shaft with many artifacts and memorabilia of the good old days of Oatman.” 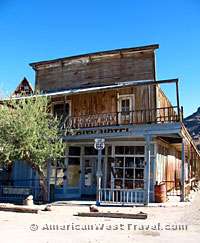 The town of Oatman started as a mining camp about a century ago and became a boomtown after gold was discovered in 1915. After the gold ran out, it served travelers on Route 66 for many years, then became a backwater after the freeways were built, and the town bypassed. Oatman nearly died in the 1960s but has survived to enjoy the current wave of Historic Route 66 nostalgia. Its most popular attraction are the tame “wild” burros that roam the streets. They are descendants of the original miners’ burros which were let loose when the mining stopped. They will accept food from any and all visitors. (The correct food for burros – pellets and carrots – may be purchased in town.) There are also daily staged gunfights and other events.

You will note there are no photos of burros or gunfighters on this page. Be aware that both the burros and the gunfighters sleep in and don’t show up until around noon time! If you pass through early in the day like we did, then you miss out!

[Photo, right: Oatman Drug Company Building, Oatman, Arizona built in 1915. Now the “Glory Hole”, an antique shop & museum, it achieved brief fame in 1962 when it was turned into the “Gold City Hotel” for the filming of the movie “How the West was Won”.] 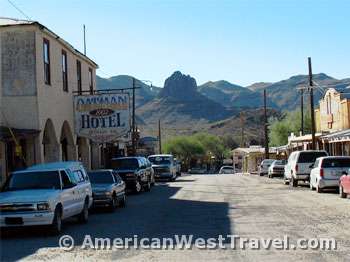 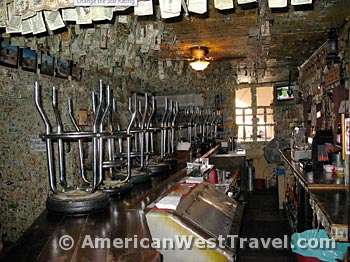 [Photos, above left: beautiful downtown Oatman, Arizona. At right: the Oatman Hotel’s saloon is decorated with dollar bills signed by their former owners. The tradition started with miners who used their hung bills as emergency money when they were short on cash.] 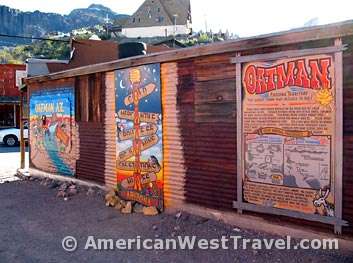 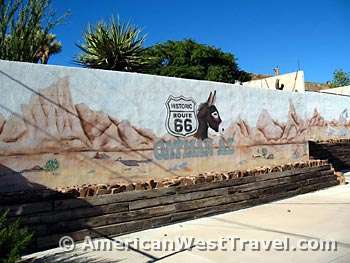 [Photos, above: Examples of interesting Route 66 wall art in Oatman.]